A recent study by California-based media research company Experian Simmons seems to prove what many already believe: Democrats and Republicans have different tastes. Their research reveals that Republicans are more likely to be enthusiastic about shows with big ratings while Democrats seem to gravitate towards shows that are less popular but more critically acclaimed.

“The big shows with mass appeal tend to have above-average scores from Democrats and Republicans but with higher concentrations of Republicans,” according to Experian Simmons senior marketing manager John Fetto, “Looking at the Democrats side, I don’t mean to make light of it, but they seem to like shows about damaged people. Those are the kind of shows Republicans just stay away from.”

The degree to which Republicans gravitate to more popular shows is striking: nine out of ten top shows on the Neilson list appear on the Republican list as well. None appear in the Democrats’ top 10. Democrats tend to adore “Mad Men” while “American Chopper” and “Pawn Stars” are more popular with Republicans.

While at first glance it might seem that there’s a “high brow versus low brow” conflict at the heart of these differences, the reality is more complicated. Republicans favor reality shows based around competition but certain particularly unabashedly trashy reality shows — “Jersey Shore,” “Kourtney & Khloe” — are more favored by Republicans. Animated comedies such as “Family Guy” score higher with Democrats, as do most shows on the CW.

“Modern Family,” a show featuring a gay couple with adopted kids, seems like an unlikely choice for the Republicans’ number three spot, yet there it is. This and similar details of the study make it difficult to wax analytical about how viewing habits relate the supposed “culture war” between the Left and the Right in the United States. But for anyone hoping for less partisanship in American politics anytime soon, the bad news seems more concrete: Glenn Beck’s show tops the Republican list while Keith Olbermann’s program is tops with Democrats.

Here are each group’s favorites: 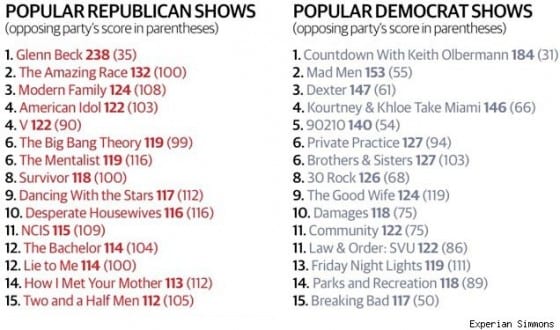