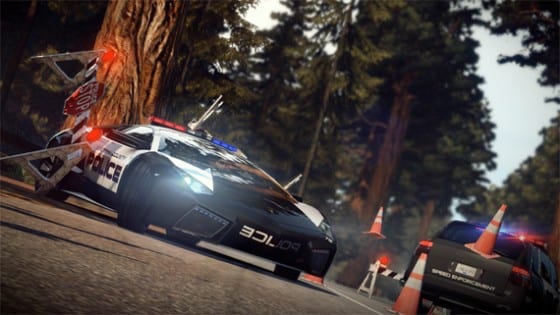 Picking out a racing game is sort of like ordering a pizza. Do you want a high-speed realistic title heavy on the realism? How about a fun and lightweight kart

racer, light on the realism? Need For Speed: Hot Pursuit is sort of like the cheese pizza of racing games; it’s extremely enjoyable, but depending on your taste – you could be left craving more.

In all honesty, Need for Speed: Hot Pursuit is one hell of a racing title. It’s built on break neck speeds, high risk, and dangerous collisions. Regardless of which side you play on, you’re sure to enjoy your time with Criterion’s interpretation of the long running racing franchise. Be warned though, those who are looking for a deeper experience, complete with customization and story may want to look elsewhere. Though it may not be perfect, Need for Speed: Hot Pursuit is still one hell of a ride.

Though it bears the name of the long running franchise, Need for Speed: Hot Pursuit isn’t like any other in the series. Rather, it feels much more like Criterion’s other well known franchise, Burnout. If you’ve played Burnout before, you’re sure to feel at home with Hot Pursuit, the cars control the same and there are even some of the same effects in use, but there’s more at steak here. You play as either an illegal street racer or one pissed off cop trying to bring said racers in. Regardless of which side you play as, the game is incredible fun. In true Criterion fashion, you’ll gain rewards for driving dangerously and performing specific maneuvers.

As you progress through Hot Pursuit, you’ll unlock new equipment to use against your opponents. Mapped to the d-pad, this equipment – which includes spike strips for the law and more powerful NOS tanks for the racers – are available only in limited supply, which goes a long way in making the game even throughout. Think about it, how many times have you been playing a racing game with weapons online, only to be cheesed out by an opponent who uses them persistently? What’s even cooler is that as you play through the game you’ll require bigger and more impressive upgrades to your ride, like longer spike strips and bigger barricades. This, combined with a truly remarkable and unpredictable AI system makes for game that’s different each time you play.

Let’s be honest though; you’re dodging in and out of traffic but deep inside, you’re yearning to see some kick ass crashes, and Hot Pursuit delivers in spades. When you wreck, the game slows things down (yes, like in Burnout) so you can see every detail. In truth, the entire game is full of incredible detail. Environments are strikingly realistic change depending on the action on the screen. Criterion are known for fantastic looking racing games, but they’ve outdone themselves here. There are a few quirks though, like a bit of slowdown when the online action gets too hectic and a quirky series of camera cuts that throw off your driving (which can be incredibly unnerving when you’re desperately trying to shave a few seconds off your time).

You’re unlikely to run out of things to do in Hot Pursuit thanks to a rather impressive feature set. Though it doesn’t support local multiplayer, the online modes are incredibly fun. The online races support up to eight players and don’t feature weapons, so pure racers will enjoy it, but most will spend the majority of their time in the Hot Pursuit events which breaks the eight players into four cops and four racers. the cops job is to stop the racers from crossing the finish line. It’s fast, it’s fun, it’s one of the best online games you’ll play this year.

As impressive as the features in Hot Pursuit are, they won’t please everyone. There’s no story here, and while that may please some, I did find myself questioning why I was going on at certain points. Yes, it’s cool to upgrade your car, but there’s really no real motivation to go on during the game’s second act.

The Blast Factor: Quirks aside, Need for Speed: Hot Pursuit is simply the best racing game this year. The gameplay is fast and fun and the crashes are incredibly wicked. Most importantly, the game features plenty of content and awesome features that are sure to keep players coming back for more. This isn’t just a reimagining of the Need for Speed franchise, this is a new series entirely.