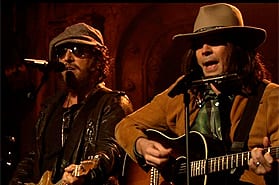 Jimmy dressed up as Neil Young, and The Boss chimes in about halfway through. It was a fantastic ballad rendition of the song!

Springsteen did his best Springsteen impression and joined in with a fake beard.

The song was originally released by Will Smith’s daughter Willow last month and has become a sensation because she is only 9 years old.

The spoof was part of a special edition of “Late Night,” when Springsteen was the only guest for the hour, as he promoted his new box set.

The Boss also did an amazing rendition of “Because the Night.”