It’s almost the time of year for snuggling by the fire and kissing under the mistletoe, but don’t get too warm and cozy just yet — you could be in for some holiday heartbreak.

According to British journalist David McCandless, two weeks before Christmas is a peak time of year for couples to break up. He knows this because he has analyzed over 10,000 Facebook status updates in an effort to discover the days of the year when you’re most likely to be watching chick flicks and stuffing your face with pints of ice cream.

In a video from last July’s TED conference in Oxford, England, McCandless explains that after searching Facebook status updates for the terms “breakup” and “broken up,” he and his colleague Lee Byron created a graph of how frequently the terms were used on different days of the year. The graph shows clear spikes in breakup activity, suggesting that these findings may hold true to relationship trends outside of online status updates. According to the data, couples split most frequently during these times of the year:

Other times of the year with notable spikes of heartbreak are April Fools’ Day (the joke really is on you) and during summer break (your ex is so last school year). Mondays are the most popular break up day of the week, because, really, what’s one more reason to hate them?

But, relax, if your relationship is intact on Christmas Day, you’re in the clear for at least 24 hours — it’s the slowest break-up day of the year. 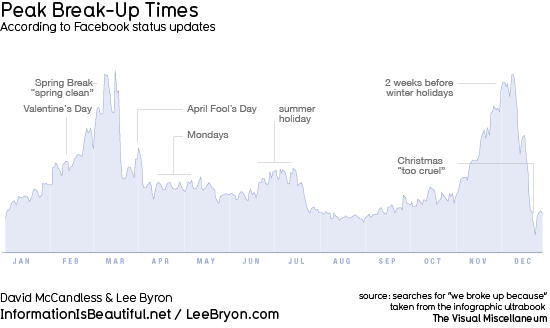