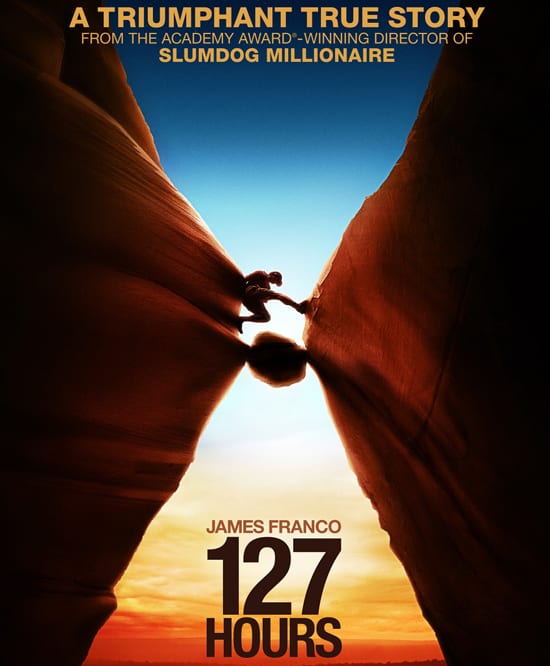 When I got home from seeing “127 Hours” last night, I was asked whether I liked it. I honestly didn’t know what to say.

“127 Hours” isn’t a movie you like; not in the way you like “Fight Club” or “Casablanca” or “A Muppet Christmas Carol.” In many ways it’s a movie you endure, partly because you’re riveted, and partly because you feel like a bad person if you don’t. For God’s sake, it’s the story of a man who had to cut his own arm off. The least you can do is watch it.

Director Danny Boyle loves talking about the thin, fragile line that keeps us from becoming packs of roving, iPhone-using animals. He examined it in the zombie flick “28 Days Later” and the study of modern India in “Slumdog Millionaire.” But never is his favorite theme more present than in the story of Aron Ralston, who in 2003 became trapped under a boulder in a canyon in Utah for five days, finally cutting off his own arm with a dull multi-purpose knife to escape. Boyle uses his considerable talents, terrific editing and James Franco’s brilliant turn as Ralston to create a full account of a man who might have been saved by his own descent into animalistic madness.

Franco makes up most of the film. Aside from two girls he runs into while hiking and the people who find him after his ordeal, most of the actors appear in Aron’s flashbacks and delusions- shadows which are simply extensions of him. Franco is in many ways an old-style movie actor: consistently thrusting himself into other challenges, other genres. He’s simply not afraid to fail (a serious risk when you’re the star of a movie with no co-stars). His Ralston is an adrenaline junkie, a guy who takes a header off his mountain bike and snaps a photo to record the experience. His carelessness is based on equal parts hubris and genuine knowledge. He describes the Canyonlands as his second home, and after his fall he tries several smart, if unsuccessful, ideas to try to free himself. The moment when he realizes he didn’t tell anyone where he was going is soul-crushing. Part of you knows that it was an idiotic move not to take precautions, but part of you admires that wild spirit, that reckless sense of adventure and it hurts to see it fail him.

Boyle’s camerawork is masterful, considering most of the movie takes place in a canyon slot a few feet wide. No one knows how to film memories, delusions and dream sequences better (a nightmare Aron has involving a flood is especially fantastic, a sequence worthy of Kubrick.) Franco and Boyle make clear that Ralston’s act is based as much on madness and despair as it is on the will to survive.

The climactic and brutal scene where Aron finally breaks his own arm and cuts through it is astonishing. Boyle forgoes having too much blood or even close-up shots of the carnage, but the savagery remains. The moment where he cuts through the primary nerve in his arm is excruciating, though you don’t see much. It’s the white noise that demonstrates the incredible amount of pain involved that really makes it hard to view.

Boyle wants us to see how unbelievably close we are to the animal; how bad timing, a wrong step and a loose boulder can suddenly render us little more than a fox caught in a trap. Facing that knowledge, and the astonishing way Ralston eventually survived his ordeal and went on to lead a normal life is nothing short of emotionally exhausting. Did I like “127 Hours”? I have no idea. But you can bet that I won’t stop thinking about it for a very long time.