BURBANK, Calif. — Whenever a new television series premieres in the mid-season (usually winter or sometimes spring) it’s a mix of good and bad. Good, because it offers something fresh for viewers at a time when most other shows are on repeat. Bad, because the shelf-life for such shows are notoriously short.

But there are silver-linings.

In the spring of 2009, ABC introduced viewers to a mystery writer turned sleuth with the series, “Castle.” The show stars Nathan Fillion as the charismatic Richard Castle and Stana Katic as Detective Kate Beckett – the muse for his literary character Nikki Heat. Set in New York City, “Castle” blends a good balance of witty dialogue, and humor; a product of spot-on chemistry amongst the entire cast. Although the show relies heavily on the dynamic and relationships between Beckett and Castle, the series’ creator Andrew W. Marlowe has developed a memorable ensemble of characters that are not mere props segueing major plot points. Instead, Marlowe has thoughtfully constructed supportive characters that bring out different elements to the personalities of Castle and Beckett from Castle’s daughter, Alexis (Molly Quinn) to Beckett’s close friend Dr. Lanie Parish (Tamala Jones). When a series like “Castle” is crafted with the kind of attention to character details it’s no surprise it has endured for three seasons in a television landscape riddled with criminal theme dramas.

Recently, Blast was invited to the set of “Castle.” We got a chance to chat with some of the cast (Seamus Dever “Det.Kevin Ryan,” Tamala Jones “Dr. Lanie Parish,” Jon Huertas “Det. Javier Esposito,” Ruben Santiago-Hudson “Captain Roy Montgomery,” and Nathan Fillion “Richard Castle”) as well as with executive producer/creator Andrew W. Marlowe. We got a behind-the-scenes look into the making of an episode, and a spent time lounging in Castle’s “loft” set between interviews.

The lovely Tamala Jones was the first to greet us on the set. Jones plays savvy medical examiner Dr. Lanie Parish, who during the recent San Diego Comic Con revealed that her character may have a budding romance. We followed up on that teaser, “When we last spoke, you mentioned your character might have a love interest storyline with (Detective Javier) Esposito…we’re a little into the season so far…how is that storyline developing?”

“Well the last episode which we just finished yesterday, ‘Close Encounters of the Murderous Kind’, there is a little surprise in there for the fans that like ‘Castle’ so much…a little exchange between Esposito and Lanie. Esposito kind of gives Lanie the ‘eye’ a little bit and that kind of throws her. You’ll see…” She says with a knowing smile, “But it starts there and begins to grow … In Episode 3.11, in terms of what people can expect … as far as Esposito and Lanie they’re going to see it…I heard a little birdie told me … it’s going down. ” For viewers who have wanted more development with supporting characters like Lanie, this comes as a long awaited treat. But that wasn’t all Jones revealed. “Terri Miller, a producer and writer suggested that anything we start — romance or Lanie’s back story – not happen all in one episode. She wants to gradually bring everyone in and move up which I think is great, and also very smart.”

But how much more are we going to see of Dr.Lanie Parish’s background? Jones admitted viewers will see more than romance this season. “You’re going to get it. And it’s going to lead up to an episode where it kind of finishes up what has been revealed to the audience.”

And as far as dream casting, Jones mentions the idea of Pam Grier playing Lanie’s mother — a comment she also made during the recent San Diego Comic Con in July, “ Oh my God, I’ve been putting it out there that I would love for Pam Grier to come and play my young mother because she’s very young to be a mother to someone my age. I would just love her; I’ve always been a huge fan of Pam Grier ever since I was a little girl.” Although Jones has her own thoughts on her character’s background story she comments, “You know Andrew (the show creator) and along with the rest of the producers and the writers; they are very very good at keeping secrets in not allowing us to have any idea on what we’re doing. The only thing they have done with me, about Lanie…they asked, ‘what do you think makes her this way? Why do you think she chose to be a medical examiner?’ Like Kate Beckett’s reasoning for being an officer; a serial killer killed her mom. So they were asking me these questions, and we were tossing out these ideas. So I don’t know what’s going to happen, but they were asking for small input. They’re very secretive. This is like a top secret scripted show, we never know what we’re getting until it’s in our hands.” This is somewhat of an understatement, for the episode being shot during our visit Jones explained, “Last night around 11:30 at night we got this episode, and I had to be here in the morning by 10 with my lines all memorized and ready.” Despite the rush of learning lines and coming to set Jones keeps a smile on her face. It seems to be the pattern with the entire cast. There’s a great sense of teamwork and love for the show which easily explains their onscreen chemistry and success. 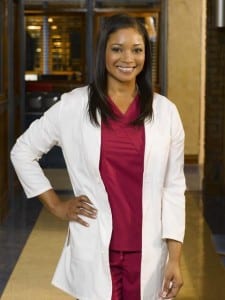 But the visit would not be complete without talking to Andrew W. Marlowe the series creator who was more than happy to answer our questions, “So far the dynamic between Castle and Beckett has a bit of this old school feel about them with a bit of noir. We’ve seen the little moments but can we expect something bigger between them this season?”

“Yes, sometime this season but we like playing the subtlety. We like the rhythm of it. Right now we have both of them in relationships with other people. But I think that gives us a safety to drift them closer together, and out of it create great moments for fans to watch. But, yes, some time between mid to late season.” The pacing Marlowe expresses in the dynamic between Castle and Beckett is one of the major appeals about the series. In fact, it’s the suspense and romantic tension which draws your attention; despite the crimes within the storylines there is enough wit and lighthearted elements to balance the tone which is not easily achieved with most shows.

“It seems you’ve drawn inspiration from various classic films like that mirror scene from Orson Welles’ ‘Lady from Shanghai’ and in the upcoming episode ‘Last Call’ there’s a bit of ‘Casablanca’ thrown in. What other films have inspired you this season when making these episodes?”

“You know being from the feature world originally before coming to television, and working with Rob Bowman who is a feature fanatic, we always try to bring an element of theatrically to the show. And when we talked feature films were our short-hands… there was a moment in our two-parter where I was talking to our director, John Terlesky, and I’m like ‘Ok, we’re going to do a little bit of ‘The French Connection’ here and this scene here is the last scene of ‘The Godfather’ with the door closing. It’s kind of short-hand, and we like to honor cinematic history. And I think it’s no secret that ‘Castle’ and the central relationship evolve from things like ‘The Thin Man’ and all the screwball comedies like Tracy and Hepburn films. So there are times where we feel like we can do (an) homage like last year with the double-down was a bit of an homage to ‘Strangers on the Train.’”

And it’s the homage moments within “Castle” that Marlowe explains is the fun part; the references are familiar enough for the characters and viewers that to a certain extent they are in on the joke.

It’s the continued balance of humor, romance, and suspense which make “Castle” one of ABC’s must watch series on its schedule.