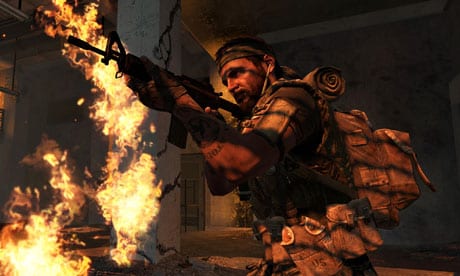 Though its seven titles have brought in over $3 billion in sales, Call of Duty: Black Ops has a lot to prove. After a tumultuous year, which resulted in one of the

messiest breakups in gaming history, Treyarch had to prove that they were no longer the series B-team, and make people forget all about a little company called Infinity Ward.

Black Ops isn’t your average Call of Duty game, and that’s evident right from the start. Rather than opening with a big military effort like previous games, you find yourself held hostage and being interrogated by a mysterious voice man. Turns out you’ve been on some seriously hardcore missions, and the details of this mission will help unlock a puzzle of sorts for your captors. Thus, the story of Black Ops is told mostly via flashbacks as you try to recall the information. Most of the action takes place in either the Vietnam or Cold Wars, meaning that you’ll get at least a fair share of differing missions as you try to uncover the truth. It’s not exactly the most original mechanic, but it does tend to keep you interested throughout the campaign.

Interestingly enough, the title brings actual historical figures like Fidel Castro, Robert F. Kennedy and Richard Nixon into the story. It can be a bit daunting to see these recognizable faces throughout the game, but they’re used tastefully enough that it doesn’t get in the way of the game or its story.

Call of Duty is known for its dramatic action, and Black Ops is no different. From the first mission, you’ll go from one thrilling set piece to another, and the sheer thrill of blowing stuff up and shooting is undeniable. Sure, some of the things you’re asked to do are a bit on the super hero side, but it’s extremely fun to jump out of a plane about to take off and then use a massive gattling gun to clear the area of enemy troops. The varied mission locations and structures make for some interesting memorable objectives.

One of the biggest complaints about going back to World War II for Treyarch’s last Call of Duty game, World at War after the wildly successful Modern Warfare 2 is that the guns felt awful slower, and while Black Ops doesn’t feature all of the high tech weaponry of Infinity Ward’s series for obvious reasons, there is a sufficient amount of advanced weaponry that all feels incredibly realistic, weighty and fun to use. 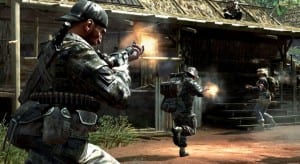 As fun as the campaign is, it clocks in at a mere six hours, and there’s little reason to go back for another play through.  As you could probably expect, the majority of Black Ops life is found in the game’s competitive multiplayer suite. At its core, it’s the same basic experience you’ve played in games past – do well, level up, get awesome loadouts, repeat. The key difference here is that Black Ops introduces currency, or Combat Points into the mix. Not only are you able to use the currency to upgrade your weapons, ammo and gear, but you can also bet them in online competition. It adds another level of intensity to playing the game online when you’re risking up to 10,000 combat points in the process.

The much talked about Zombie mode from World at War makes a return in Black Ops, with new maps and a new and interesting set of characters. The dark humor and co-op gameplay make for an interesting time (seriously, try not to laugh at some of the one liners), but it quickly wares thin once you realize that besides the asthetics, almost nothing has been changed since the last go-round.

Blast Factor: Call of Duty: Black Ops is a remarkably fun and inventive shooter; sure it has its share of imperfections, but they’re all minor when the game is this fun to play. Though the main campaign is a bit on the short side, it’s filled with thrilling set pieces and a compelling narrative along with the always exciting multiplayer suite. Say goodbye to your wife and kids, kiss the sun goodbye – your new Call of Duty fix has arrived.