“Unstoppable” is a movie that begs for catchy pull quotes in its trailer.

I mean, come on, it’s a movie about a runaway train. There are so many metaphors I could utilize; obviously with caps lock and copious exclamation points. I could write 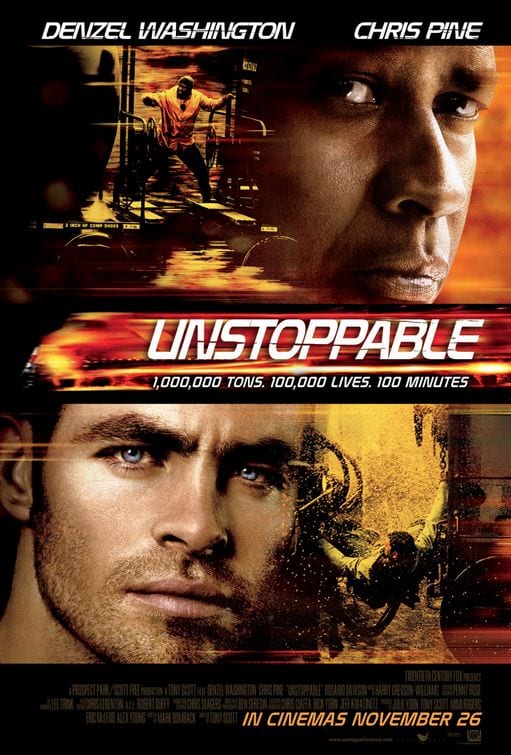 something like “NON-STOP action thrill-ride!” “This locomotive delivers the goods!” “Hop on the Denzel Train and hit the accelerator!”

The train in question was set off not by a terrorist or a crazed train operator, but by a more commonplace threat: people making stupid mistakes. After being sent off without a driver, carrying a load of extremely flammable materials, the train company scrambles to chase it down and stop it before it crashes in a highly populated area.

Meanwhile Frank (Denzel Washington) and Will (Pine) are riding on the same rail, having somehow missed the message that there’s a train coming on full speed directly at them. It’s totally cool though, because Frank is played by Denzel Washington, and knows exactly what to do, with the help of newbie Will and train depot middle manager Connie (Rosario Dawson).

It’s an absurd concept, but director Tony Scott handles the material with a surprising amount of restraint. His movie is a study of a little-seen industry, one based on sheer muscle, grit and rare American ingenuity. Between scenes with Frank and Will jumping on moving train cars and talking about Frank’s daughters working their way through college at Hooters are truly depressing; scenes of the train company’s corporate monkeys sitting in a high-rise and discussing whether it costs less to derail the train in the countryside, or blow it up in a small town. Sure it’s a little cliché, but that doesn’t make it any less true.

The movie is also about scale and noise. Scott includes shots of the trains, with their larger than life sounds and astonishing size the way other action film directors use gratuitous explosions. They’re huge, anxiety-producing and verge on the pornographic. Scott hikes the sense of panic up almost imperceptibly throughout the movie, until by the time you’re watching Pine dive in between to moving train cars to cable them together you’re holding your hands in front of your eyes without realizing it. In the climactic scene, as they round an impossibly sharp corner surrounded by flammable oil (yes, really) I can’t lie; I was on the edge of my seat.

Washington is the glue that make this piece of madness work. He’s almost lackadaisical in his delivery, funny and charming; you get the feeling he was having a blast making this movie. Together he and Pine are basically reenacting their actual roles in Hollywood: Washington as the older veteran, and Pine as the young upstart nipping at his predecessor’s heels, and their dual scenes are surprisingly snappy and fun. Rosario Dawson is also lovely and terrific as ever, acting the hell out of a very limited role.

After going to see this movie I thought about Lumiere’s public screening of “The Arrival of a Train in La Ciotat Station” in 1896. The legend goes that the French public was so astonished by watching a moving image of a train, apparently speeding right toward them, it made them flee the screening, running frightened into the Paris night. I wonder if they’d had trailers back then what they would have said. “This train is on FIRE! You’ll want to run from the shadowy force of MAN-MADE STEEL heading directly for your FACE!!”

“Unstoppable” proves that more than 100 years after Lumiere scared the hell out of those Parisians, and even with our jaded, experienced eyes, the movies we watch can still make our hearts race, can still get our adrenaline zooming through our lizard brains. That feeling is still well worth the price of admission.