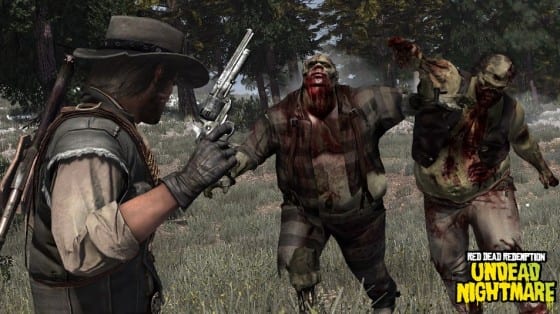 would feature a story similar to that of GTA IV’s Episodes from Liberty City, and that players would get to play with fan favorite John Marston, and most of all, that it was about zombies, the video gaming consortium were all on-board.

Undead Nightmare is a lot of things, it’s one of those games were you need to mention many of it’s features and shortcomings to be able to help gamers decide whether it’s worth the purchase or not.

The game starts out in the most epic of fashions, you kick off the game with Marston going home for his wife and kid, they all sit down and have nice, quality time together as a family, during the conversations that take place, John wonders were Uncle is, before they all go to sleep. Meanwhile, Abigail and John wake up by the sudden entrance of Uncle, who enters as a zombie, he eventually bites Abigail, who in turn bites her son, after shooting Uncle, Marston ties up his wife and son, who are now zombies, and embarks on an adventure to figure out what’s going on and how to cure this disease.

From the get go, even if you haven’t even dwelled in the original Red Dead Redemption story for long, you’ll feel that the game is a stripped version from the original. There is no Honor or Fame system that determines how people treat you, the game doesn’t have money, but instead bullets might act as the only currency, but you don’t actually buy stuff with them, you just earn them from either the zombies you kill, or you collect them from boxes after clearing up towns (which you will be doing for the majority of the game).

Despite it’s epic beginning, the game fails to carry the same tempo throughout, the game tends to repeat itself too often, you’ll find yourself clearing graveyards and towns until they are safe, sometimes you’ll find yourself clearing towns again, once they are attacked by zombies for the second time. Thankfully all this is fun, but fans need to understand that this is one of the many ways Rockstar did on purpose to increase the longevity of the game.

The game will take you around 6+ hours to finish, but these hours will be infested with repetition, once you finish the first few missions, the game will drop you messages like “It’ll take Nigel a few days to find a way to enter Mexico, you should go and help the other survivors in the other towns”. Writing the word “should” is an understatment here, they should’ve wrote “You must help the other survivors in the other towns”. Another notable issue is the fact that you can’t camp anywhere on the map (which makes a lot of sense, seeing how the world is infested with zombies), this means that you’ll have to clear out a town to be able to save and fast travel in it, and you can only fast travel to towns you’ve already visited. This, again increases the longevity of the game, but in a way that isn’t all too exciting.

Glitches have also been an issue throughout the game, sometimes the characters skins didn’t load, which left some very ugly cutscenes being played, and there was a cutscene were they were talking about a missing girl in the poster on the wall, but the poster’s graphics didn’t even load, which left me wondering what the hell they were talking about. In case you’re wondering, this game was reviewed using a brand new copy of Red Dead Redemption and a brand new PS3, so it’s safe to say that many people will find some weird issues occurring during their time with Undead Nightmare. It has to be stated though, that this is a sandbox game, glitches are guaranteed to be found, and almost everytime you play the game you’ll find a different glitch in it.

The one thing that stood out in particular, is the fact  that during the first missing souls mission, you will path through two mountains that eventually close down and narrow the road for you, in this narrow path you will find literally over 100 zombies, and trust me when I tell you this, the frame rate drops massively, the game runs at around 10 frames or so during the time in said path, and it is amazing why Rockstar inserted so many zombies on the screen to make a certain part of the game almost unplayable.

Now that the annoyances and minor quibbles are out of the way, it’s time to mention all the good things Undead Nightmare does. Shooting zombies is an absolute blast, whether it’s in the story mode or the online Undead Overrun you will have a blast blowing zombies’ brains out, speaking of which, you MUST shoot zombies in the head, while in the Resident Evil games you can kill zombies by shooting them with 5 bullets or so in the body, you might find yourself shooting an entire clip to no avail, this gives Dead Eye a whole new importance in the game, it is intrumental for your survival. And while Undead Nightmare doesn’t have many of Red Dead Redemption’s features, it has a few unique features of it’s own, it has 4 mystical horses, the horses of the apocalypse they’re called, and they are by far the best horses in the game. For example, the apocalyptic horse of fire (War) has his hair burning in flames, and has infinite stamina, he also burns any zombie that messes with him, if he dies you’ll find yourself with the old horse you once owned, if your horse  dies, you can whistle and he will come for you as a zombie horse, he’ll have unlimited stamina, but he won’t obey you all the time.

Also, all the animals in the game have been all been recreated as zombie animals, such as the bears and cougars, and blowing their brains out is a ton of fun too because you actually see their head scatter all over the place. Undead Nightmare also let’s you kill many of the characters from the original game who turned to zombies, and at long last they’ve fulfilled my childhood dream of blowing the brains of a gay Mexican zombie general (please don’t judge me).

The most impressive thing about Undead Nightmare though, is the amount of features you’re getting for just 10 bucks, you’ll be getting a game that is filled with Left 4 Dead like zombies, cutscenes, impressive and humurous dialogues, new weapons, trophies and online modes, the downside in this game, is the fact that if you haven’t played Red Dead Redemption, you won’t be able to understand the majority of the funny cameos in the game, while the fans of Red Dead Redemption will appreciate it, the new players will feel disconnected from some of the events of the game.