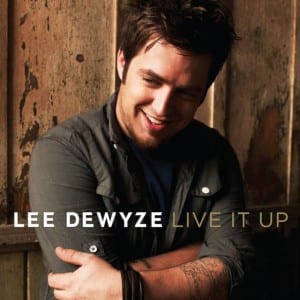 With “American Idol” gearing up for its tenth season in the New Year, Simon Fuller’s pop-star assembly line shows no signs of slowing down. Come January, prime time TV, YouTube, and countless glossy magazines will, once again, be overrun with stories of fame-hungry contestants and the blinding white glow of Ryan Seacrest’s teeth. But before the new season starts, the teenie boppers and soccer Mom’s of Middle America have a new album to buy. The time has arrived for last year’s winner, Lee DeWyze to release his debut record, Live It Up from Fuller’s RCA label.

For those (like this critic) who missed DeWyze journey to “Idol” triumph, the Illinois native apparently wowed judges and premium-rate-phone-voters with covers of classic songs like Bill Withers’ “Ain’t no Sunshine” and R.E.M’s “Everybody Hurts.” DeWyze’s vocal style is pleasant enough, but it’s not particularly impressive or interesting. Playing his songs at full blast won’t threaten any nearby glassware. DeWyze sounds more like John Mayer than Otis Redding. Like Mayer, the songs from his new album will likely fill the top 40 like ignorable pieces of furniture in a young professional’s condo.

The creation of a musical form of Ikea was surely what the RCA puppeteers had in mind for DeWyze’s debut release. “Live It Up” achieves the kind of light, generic pop/rock that it’s demographic can accept with ease. The album is packed with soft sounds and depressingly predictable key changes. DeWyze’s lyrics are also pretty unimaginative. The eleven songs on the album deal with all the issues that one would expect from the winner of a national talent contest. The fact that DeWyze sings about young love and young heartbreak for his young audience is easy enough to swallow. What does offend about the songs is their dreary lyrical content.

Throughout the record, DeWyze doesn’t just flirt with the use of tired clichés; he takes them out to dinner, picks up the bill, and drives them home at the end of the evening. The chorus of the sickeningly catchy, “Sweet Serendipity,” for example, includes the lines “I’m always landing on my feet / in the knick of time / by the skin of my teeth.” The Idol champion is also a fan of stringing together seemingly senseless similes in his songs. On “Brooklyn Bridge,” DeWyze croons over a lounge jazz piano, singing “Every time you’re near / Its like standing in Time Square /on New Years Eve and no one is around / Like looking up on a summer’s day / and seeing snowflakes coming down.” What those lines are supposed to say about the giddy excitement of a new love is anyone’s guess, but don’t be surprised when your teenage cousin uses them in her facebook status.

The soppy lyrics and recycled pop formulas aside; surely, everyone over the age of sixteen can agree that Lee DeWyze’s success is not entirely dependent on the music he produces. Whether or not “Live It Up” sells in the way RCA would like it to, hinges on the capability of those who voted for the twenty-four-year-old on “Idol” to make room for him in their overloaded psyche. With Bieber Fever at full tilt, and a new season of “American Idol” around the corner, DeWyze will, once again, have to compete to win the hearts and minds of the record-buying public.

In the run-up to Live It Up’s November 16 release, DeWyze’s managerial team are sure to do all they can to make a return on their investment. Performances on “Good Morning America” and renditions of “Star Spangled Banner” at televised sporting events doubtlessly beckon. Sadly, for DeWyze, the early signs are that his career will better resemble that of Ruben Studdard (remember him?) than Kelly Clarkson. “Live It Up” is not the egregious thing to be released from Simon Fuller’s evil empire (he’s also responsible for the Spice Girls and making Piers Morgan famous). It seems unlikely, however, that the fifteen minutes gifted to Lee DeWyze will extend much further than his first RCA release.