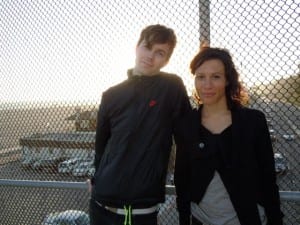 The dance punk duo Matt and Kim burst on to the music scene with their hit “Daylight.” The Brooklyn based duo charmed their fans with their electric energy ridden sound. On November 2, the pair dropped their latest album “Sidewalks.” Sidewalks will prove to charm more fans with their signature sound.

Along with a new album, Matt Johnson and Kim Schifino are currently on tour. “More people come to the shows and more people get wild. It’s all that I can ask for,” said Matt.

Matt and Kim shows are infamous for a wild good time which is fine by them. “It makes all the difficult things worth it,” said Matt.

The pair is extremely proud of Sidewalks.

“We have been working on it for nine months. I’m so ready for people to hear it,” said Matt. While the album is “sonically more finished” the band promises that it is still “very Matt and Kim” sounding.

“This time around we were working with people who knew what they hell they were doing. Our focus was making it the best it can be,” said Matt. During the making of the album, the duo had a mantra they told themselves repeatedly. “We would ask ourselves ‘What would Matt and Kim do?’ and the answer would always be simply pull back.”

It has been well documented that the pair has a do it yourself attitude when it comes to music. Matt said that they try to take a natural approach to playing their instruments and not get to masterful with them stating that it “makes it more exciting that way.” “There is a place for that but that is not what Matt and Kim would do.”

When writing songs Matt and Kim usually come up with the music first then the lyrics. “We write lyrics from whatever the feeling we get from the song,” said Matt. Kim has a penchant for making songs as fast as they can. “I’m just trying to keep up and hold onto the bull,” said Matt about his musical partner.

One important thing to about Matt and Kim’s songwriting is that they don’t write love songs. “Plenty of bands do that,” said Matt.

The pair has no real plans for their future and is just reveling in their success. “I never expected any of this,” said Matt. “We started playing in basements and it just organically grew from there. It is funny. The most steady job I’ve ever had is in rock n roll.”