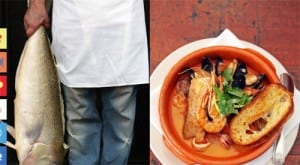 MIAMI — Tucked away on the west end of Lincoln Road is this excellent indoor-outdoor spot loved by well-heeled diners for its excellent seafood.

For the quality here, the prices are quite reasonable. Chef Simon Stojanovic (who worked for Michael Schwartz at Nemo and then Michael’s Genuine) has constructed a menu that leans heavily on local produce and “sustainable” local fish, but after those similarities, he’s off into new territory not explored by Schwartz.

There are only a few pastas on the menu, but they’re kick-ass good. (Try the homemade fettuccine with rock shrimp, snow peas, and asparagus.) One night we had jack fish served over a ragout containing artichokes, carrots, tomatoes, and cippolini onions. But it’s not all about seafood: the beef, chicken and pork are all organic, the best of the best. Entrees run $20 to $30 (some beef entrees are higher) with starters going for $10 to $15. The ceviches are standouts, too, at $14 or $15. Enlarged its space in 2010 so it’s not as cramped as it used to be. Always a good bet.

DRINKS: Beer and Wine only