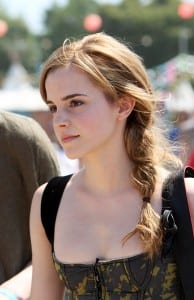 As you all know, we are counting down the days until the release of Harry Potter and the Deathly Hallows: Part 1.”

“Hermione Granger,” Emma Watson was recently picked for the cover of the December issue of British Vogue.

MTV News reports that she admitted that she was 17 or 18, nearly a decade after hitting it big in “Harry Potter and the Sorcerer’s Stone,” when her father first sat her down to have the “money conversation.”

Until then, Watson had received a weekly allowance of about $75, but her dad let her in on the fact she was actually worth something like $32 million.

That also makes her the highest paid woman in Hollywood.

The sophomore at Brown University in Rhode Island also recently chopped her hair off, following the trend of other ivy League starlets. We don’t have a photo yet, but we’ve seen it, and she looks great.