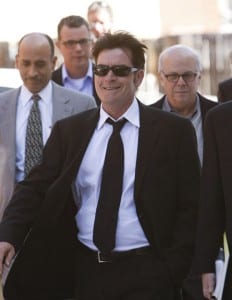 Charlie Sheen’s friends fear the worst for the “Two and a Half Men” actor.

RadarOnline reported yesterday that he’s been on a self-destructive binge of drugs and hookers in California since cops were called to The Plaza hotel last week to shut down his furniture-throwing meltdown.

According to the source, a longtime Sheen pal ominously predicted, “Charlie Sheen is going to die this week.”

However his manager, Mark Burg, told TMZ that Sheen was “normal” and planned to pass out candy to trick-or-treaters last night.