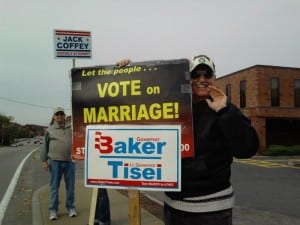 BRAINTREE — Police are investigating an alleged assault by a Charlie Baker campaigner on a lesbian who took a picture of him holding a Charlie Baker for governor sign taped to an anti-gay marriage sign.

Chris, a 36-year-old Dorchester woman who asked that we not use her last name, in an exclusive interview, told Blast Magazine that, on Saturday, she was shopping with her wife at Five Corners when she saw the Republican supporter holding a “let the people vote on marriage” sign. She said she approached him and argued about the sign when he yelled at her and hit her in the face.

A spokesman for the Charlie Baker campaign did not respond to requests for comment, but Baker is an open and ardent supporter of gay marriage. Baker has a gay brother, and some conservative groups oppose his candidacy for governor because of his stance on gay rights.

Braintree Deputy Police Chief Russ Jenkins said the incident was under investigation, but since it was not reported until Sunday, more than a day afterward, police have not been able to identify or find the man.

“We had just finished shopping for Halloween costumes,” Chris said. “When we were driving away we noticed the man standing at the intersection of Granite Street and West Street.”

The two had seen the man, who appeared to be in his 70s, closer to their home in Dorchester in prior weeks, and decided they wanted to take a picture of him to share with their friends online.

“Some people we know had stated that they like Charlie Baker and were thinking about voting for him and we wanted to show them on Facebook what we think he really stands for,” Chris said.

The couple stopped their car, and Chris asked if she could take a picture of the man. Chris said that the man said yes.

After the picture, the man asked why she wanted a picture, and Chris said she told him she disagreed with his stance on gay marriage.

Then the screaming started.

“He soon came to realize I am a married lesbian. One that happened, he unleashed the most disgusting verbal attack on gays that I’ve heard in awhile, and I’ve heard quite a few unfortunately,” Chris said. “He also promised that should Charlie Baker win the election, gay marriage will surely be repealed and my marriage will cease to exist. He also promised many other horrible things will happen to me because of who I am and who I love.”

The two women and the man yelled at each other about the morality of homosexuality, religion, and whether or not individuals should have a right to vote on the merits of gay marriage.

According to the women, the man, while holding his sunglasses, raised his hand to Chris’s face and pressed his fist against her chin. After holding his hand still for a moment, Chris said the man firmly followed through with his fist and pushed her face away from him.

Chris’ wife shot a video of the altercation and provided it to Blast.

Chris is seen approaching the man while the two are in the midst of a screaming match. Denise is heard asking her wife to “stop” and trying to physically pull her away from the situation. At this point the screaming comes to a nearly inaudible pitch and the image of the video is lost because Denise’s hand obstructs the lens.

But near the end of the clip, a second man’s voice is heard saying: “You can’t touch her, Joe,” to which the woman responds: “Too late he already did.”

Chris was unharmed. The couple got into their car and left after the alleged assault.