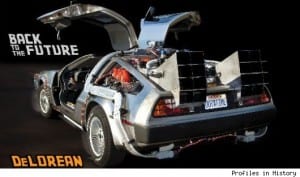 This year is the new 25th Anniversary of a legendary film “Back to the Future” and Profiles in History is partnering with the foundation created by Michael J. Fox, who starred as Marty McFly in the films. The foundation’s Team Fox in an amazing auction of over 150 pieces of Hollywood memorabilia hope to raise money for Parkinson’s research, as well as fund much-needed lifesaving support for disabled, abused physically challenged and underprivileged children.

Of course, among all the iconic the film-related products, you can bid on DeLorean Time Machine.

Eric Stoltz was replaced by Fox five weeks into production so he was the original Marty.

Anyway, how much would you pay to go back to the future?