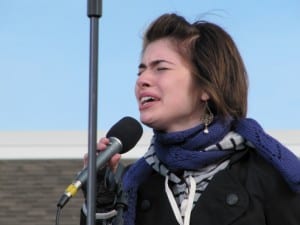 QUINCY — Siobhan Magnus, who was the sixth place finalist on the ninth season of American Idol, is a local girl from Barnstable. Today she made the trip to Quincy to join Joe Biden, John Kerry, Vicki Kennedy and other prominent Democrats in a rally for Norfolk District Attorney William Keating, who is hoping to take over the seat being vacated by Rep. William Delahunt.

For those who enjoy seeing people merely because they have been television, her appearance may have been a treat. But as soon as she began her rendition of “Star Spangled Banner” it was evident that her voice — at least today — was neither powerful nor pretty. Worse, she chose an over-ambitious arrangement whose glides and turns would still have been a challenge to a singer of far greater talent.

The crowd showed appropriate appreciation for her willingness to perform and to support their favorite candidate. But even as people put their hands together for applause, many were turning to the person next to them to whisper a critical remark. She wasn’t “Rosanne bad” but it was pretty terrible for someone who is supposed to be one of the best young vocalists in the United States. Watch the video.

When she returned to the stage to sing “America the Beautiful” her rendition was simpler and less-offensive but still nothing to brag about.

Ayla Brown, daughter of Republican Senator Scott Brown, has been on American Idol as well. It might be interesting to see which of these two young local ladies — one a Democratic supporter and the other the daughter of a Republican — sounds worse without the backing of Simon Cowl’s production company. If that contest ever happens, let me know how it turns out. I’m staying out of earshot.

As far as I’m concerned, Joe Biden — or rather his extra-planetary auto-tuned counterpart — was by far the best singer to take that stage today.