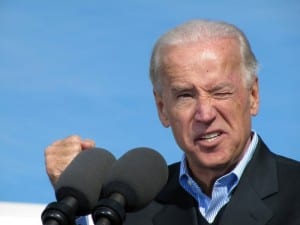 QUINCY — The race for the 10th Congressional District of Massachusetts is a close one in an election that many view as pivotal. Norfolk District Attorney William Keating is running to succeed retiring fellow Democrat Rep. William Delahunt. Hoping to tip the scales in Keating’s favor, Vice President Biden appeared today at a rally in Quincy alongside fellow prominent party members including John Kerry and Vicki Kennedy.

It was an outdoor event where the sun was shining, the stage was decorated with ornamental gourds, and autumn-colored hills in the distance looked calm under a bright blue sky. And there were occasional moments of levity, such as when the bald-headed Keating kidded Kerry that at least he didn’t have to worry about his hair flopping in the wind as the Senator’s was. But the overall tone was serious. 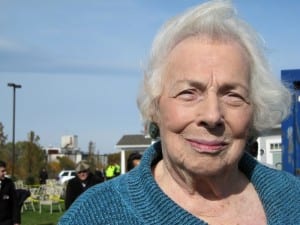 Thelma Goldstein, a nonagenarian resident of Falmouth, MA, is known locally as Matriarch of the Democratic Party. (John Stephen Dwyer for Blast Magazine)

Alluding to a quote from Mark Twain, the Vice-President assured the crowd of a few hundred people that “reports of the death of the Democratic party are premature…we are going to maintain the Senate, we are going to have a majority in the House, and Bill Keating’s going to be part of that majority.”

He also warned the crowd that today’s GOP “is not your father’s Republican Party” and said that its unprecedented fiscal irresponsibility and lack of concern for working people is the reason middle-class families have “watched that (American) Dream slip away.”

Among other Democrats speaking on Keating’s behalf was Delahunt, Rep. Ed Markey, State Rep. Sarah Peake, and local supporter Thelma Goldstein, a nonagenarian who voted for Franklin Delano Roosevelt and whose long-time political involvement has earned her the honorary title “Matriarch of the Democratic Party.”