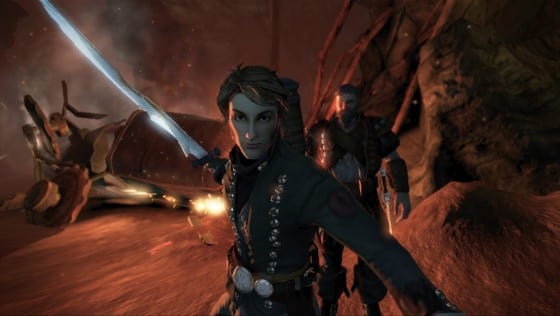 When Lionhead studios head Peter Molyneux announced the original Fable to the world before its 2004 release date,

he made some pretty lofty promises. Though the team at Lionhead Studios tried, the finished product didn’t deliver on a number of those promises. Now, over six years later, little has changed and while the game does feature a number of gorgeous set pieces and a slew of breathtaking moments; it also fails to deliver in a number of ways, including game crippling bugs and a still unfixed combat system. But hey – at least John Cleese is your butler.

In theory – Fable III is a much different game than its predecessors. Rather than starting off as an earnest and simple village boy who goes on a quest to become a great hero, you start off as a prince… who goes on a quest to become a great hero. While it may just be a new coat on the same old mechanic, it does add an interesting twist to the formula, from the start, you’ll be making decisions that impact an entire kingdom, as well as your character’s personal growth. You play as the son (or daughter) of the hero of Fable II, your older brother Logan has taken up the throne and rules the kingdom of Albion with an iron fist. Do you follow in his ways and strike fear into the citizens, or rule as his just and fair counterpart? Not only what you do, but how you do it will have a lasting effect on Albion and its citizens.

While you do have an impressive amount of choice in Fable III, the main story is strangely linear. Fable III features a much bigger emphasis on story, and isn’t afraid of holding your hand to tell it.  In some aspects, this makes the game a bit too easy – you’re rarely allowed to do anything that will change the way the game’s main characters see you. In fact, it’s not until you overthrow your brother’s rule and take the thrown that you’re given the freedom you’re accustomed to in Fable games. It’s excusable to an extent, as it makes for a far much more interesting story, but you lose a sense of what makes the franchise so different.

Make no mistake about it though – Albion is the game’s main character. The folks at Lionhead have brought the village to life more impressively than ever here, and you’ll find it tough not to marvel at times. The main kingdom of Albion is now a center for industry and trade, her skyline is dotted with smokestacks and factories, but going outside of this area, as your quests often require you to do will take you to far different worlds, from snow covered mountain tops to dense and foggy forests. The citizens you’ll encounter are just as full of life as the city itself, they’ll have their own thoughts, send you on side quests and sure as hell aren’t afraid to tell you what they think of your brother and yourself. And yes, like previous Fable games before it, you’ll be able to make friends, enemies or even marry any of them. Oh, and John Cleese is your Butler, so that’s cool. It’s these aspects of Fable III perhaps that make the title such a joy to play through.

As you may have expected, Fable III features an excellent player progression system, but here, it’s much better than even past Fable games. Everything you do, from how you interact with the world around you, to how you choose to fight will shape how your character looks, behaves and is perceived. Use a lot of magic? You’ll start to develop an otherworldly glow. Carry a huge broad sword and you’ll find yourself bulking up faster. What’s interesting here is that with the vast differences between the cities and villages, how you’re perceived throughout Albion will change dramatically as you traverse the game’s world.

Of course, you don’t become a hero by impressing the towns folk with your wit and charm – you’ve got to get your hands dirty and slay some evildoers (or good guys depending on how you act). Unfortunately, the combat in Fable III suffers from some of the same issues that plagued the first two games, and these issues tend to make the combat sections of the game some of the most unsatisfying portions of the game. The targeting system is completely unreliable, but the strangest aspect is the fact that unlike in previous games, each of your attacks acts completely independent of each other, which means that you’ll have no incentive to build up each of your character’s abilities. Instead, you’ll focus more on what’s successful – which in most cases turns out to be magic attacks, which can take out an entire group of attackers at once.

Perhaps the most disappointing part of the Fable III experience is the weird series of technical snafus seen throughout the game.  There are several instances throughout the game where the framerate drops dramatically.  The majority of these drops occur during the game’s side games, like the job missions like Lute Hero or Blacksmithing. Another issue is with the game’s frustrating path finding issues. Sadly, these issues effect the one thing that’s supposed to be a constant in the game – your dog. In a perfect world, your dog helps you find hidden items and attack enemies, but more often than not your canine companion will get stuck behind objects. The same thing occurs with anyone you happen to be holding their hand. It’s frustrating and stops you from enjoying a good portion of the game.

The Blast Factor: Fable III is both as close to what Peter Molyneaux originally promised, and the most far off.  Traveling through Ablion is a deeply rewarding and interesting experience that you’ll want to keep going back to. It’s not perfect, but there’s enough here to keep even the most seasoned heroes satisfied for quite some time to come.