To watch a play is to watch people playing. It’s a grown up version of what we did as kids. This is the assumption at work in the quirky and deceptively simple, “Circle, Mirror, Transformation,” the first of three plays by Amherst-born playwright Annie Baker, set in the fictional town of Shirley, Vermont, all of which are currently on stage at the BCA courtesy of three local companies.

Kids play house, or play doctor or play solider, as a way practicing the roles into which they are supposed to grow. We grown-ups put on our plays, and attend them, as a way of stepping back to see who we’ve become, how we treat each other and why. Kids play as a way to make friends, and similarly, we grown-ups come to plays to forge a temporary yet hopefully meaningful community.

“Circle, Mirror, Transformation” chronicles a 7-week adult drama class at Shirley’s community center.  This isn’t a rehearsal play, as no plays are rehearsed at time, but rather, it shows what happens when touchy-feely theater teacher, Marty, (Betsy Aidem) leads four students at very different places in their lives, through a series of often-absurd seeming theater games.

One of these students happens to be Marty’s husband James (Michael Hammond), the owner of the community center, a former hippie with a conservative facade. A second is Schultz (Jeremiah Kissel), a middle-aged carpenter who is feeling unstable and in need of something new after a recent a divorce. A third student, Theresa, a beautiful, exuberant, and free-spirited blonde, catches both of their attention.

Unlike the other students, Theresa, it turns out, has worked as a professional actor in New York for several years. Theresa says she longs to really reach people, to positively affect their lives in a way that she came to fear she could not achieve in the New York Theater scene. She has therefore moved to Shirley, Vermont to study massage therapy, so she can work with people as directly as possible. 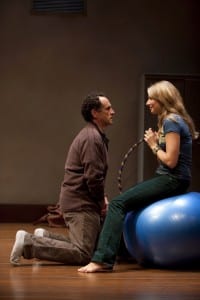 The class is rounded out by the 16-year-old Lauren (played with brilliant humor and nuance by Marie Polizzano), who longs to be a star of high school musicals and is possessed with the awkwardness and impatience so often characteristic of her age. Lauren feels like a surrogate for the audience when she complains to Marty that what they’re doing in the class doesn’t feel like real theater. She wants to work on scenes from a script instead of simply going through games and exercises. Her objections give Marty a chance to exhort all of us to have patience and keep an open mind.

Both characters seem to have a fair point. When the play begins, particularly if one is familiar with the theater games being shown, it’s hard not to feel like this is a bit of indulgent inside-baseball, or lazy writing—look how absurd theater games look when you take them out of context. Baker’s really up to something else, however. She wants us to see that you don’t need a contrived story to stage an effective drama, that five people gathering in a room a together, trying to do something difficult, is a situation rich enough with conflict, subtext and humor to make for an entertaining and meaningful play.

The drama that unfolds as we watch this group play strange and challenging games together in their community center, turns out to be something like “Waiting for Guffman” meets “The Breakfast Club.” The play is more episodic than suspenseful so it calls for an extremely charismatic cast to keep you interested. This the Huntington delivers.  As Marty reminds us, it may call for some patience and open mind, by “Circle, Mirror,” turns out to be worthwhile playtime.

Directed for the Huntington Theatre Company by Melia Bensussen, “Circle, Mirror, Transformation,” plays at the Calderwood Pavilion at the BCA through November 14