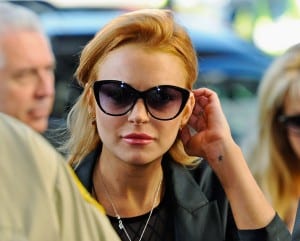 Lindsay Lohan arrives for a mandatory court appearance before a judge at Beverly Hills Courthouse on September 24. (WireImage)

A Beverly Hills judge is expected to address the decision Friday when Lindsay Lohan, 24, faces a probation violation hearing for failing a drug test last month in her DUI case.

Lohan is ordered to appear in person, and she has voluntarily spent the last three weeks at the Betty Ford Center in Rancho Mirage, Calif., which is at least her fifth time in rehab after she bailed out of jail on September 24.

People reports that Los Angeles criminal defense attorney Steve Sitkoff, who is not directly involved in the case, said, “The key here is her progress in treatment. … The better she’s doing in rehab, the less likely Judge Elden Fox will throw her in jail.”

People magazine estimates that those are the possible scenarios on Friday: