Another Halloween means another slew of scary movie sequels and remakes. While gore-mongering franchises like “Hostel” and “Saw” have aimed to make audiences squirm in their seats over the last few years, the makers of “Paranormal Activity” and its prequel take a more suspenseful, low budget approach.

Like last fall’s surprising box office smash, “Paranormal 2” is shot in one location with a cast made up of entirely unknown actors (with the exception of “Katie” and “Micha,” the couple who were terrorized by a house-invading demon last year). Those left with questions after seeing the first “Paranormal Activity,” will be glad to know that this installment clears up many discrepancies regarding exactly why an ancient evil spirit would choose to stalk of perfectly normal young couple. Though these links to the first film are tenuous and a little too convenient, they serve the purpose of allowing audiences to concentrate on being spooked instead of worrying about gaps in plot. 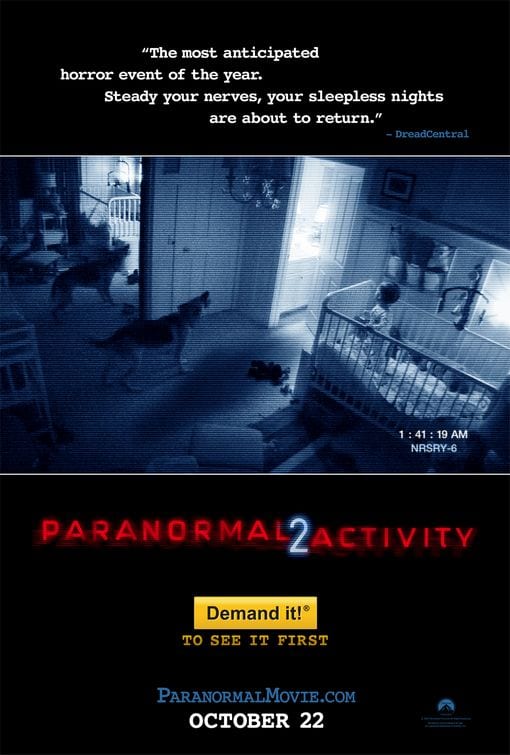 In this prequel we meet Katie’s older sister, Kristi and her family that is made up of husband, Dan, stepdaughter, Ali, and infant son, Hunter (who the demon has a particular penchant for hassling). Performances by most of the cast, none of whom are yet credited on any Internet databases, are pretty natural. “Dan,” in particular fills the role of skeptical husband rather charmingly and is given some nice comic-relief-fulfilling lines. The female contingent of the cast is, at times, guilty of some fairly hammy examples of acting terrified. The number of times that “Ali” and “Kristi” perform petrified runs up the stairs or fearful treads over to a suspicious door borders on the comical.

Director, Tod Williams does a fine job of building suspense by using six stationary shots from cameras whose presence in the house is explained by a new security system “Dan” has installed after an apparent break in. What’s clever about these repetitive wide-frame shots is that they draw audiences into to every detail of a room. Rather than turning away in disgust every five seconds, as with other horror films, viewers of “Paranormal 2” find themselves searching every inch of a frame to spot a moving door or sliding toy. Unfortunately, though this kind of filming might be the movie’s biggest triumph, it also becomes its greatest downfall. After using this technique in the first “Paranormal,” and hammering it home in this one -excruciatingly long shots of a baby’s bedroom or a kitchen begin to parody themselves and the film as a whole. Giggles amongst the audience, during a sped-up sequence of the family dog sleeping, signal that making a “Paranormal” trilogy might prove to be a fairly futile endeavor.

That said, the beauty of this franchise for Paramount (the studio that has produced both films), lies in its financial turnover. Costing just $3 million to make, “Paranormal Activity 2” is expected to gross around $25 million at the box office. Even if profits proved to be much lower for a third film, Hollywood big wigs will still see sense in continuing to make these low-budget thrillers until people stop going to see them all together.

“Paranormal Activity 2” is not a revelation, it might not even give you nightmares, but it does, at least, have some form of filmmaking credibility. If your sick of watching people gruesomely tortured in absurd ways — this is the horror flick for you this Halloween.