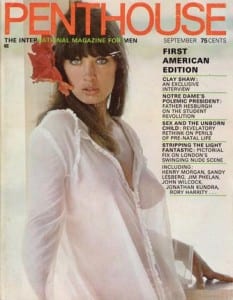 Guccione died at Plano Specialty Hospital, with his wife, April Dawn Warren Guccione and two of his children, Bob Jr. and Tonina, at his side.

April’s mother, Georgann Flinchbaugh, told CNN that her daughter, who had been married to the publishing and entertainment magnate since 2006, was too distraught to talk. She said, “He was a wonderful man. She’s heartbroken. He was the love of her life.”

Guccione took published nudity to a new level with the hardcore Penthouse magazine, one of several magazine ventures he would launch, in 1965. He and Playboy magazine founder Hugh Hefner competed for the attention of men for several decades.

Guccione, who was married four times, also produced/invested in several movies, including “Caligula” and “Chinatown.”

Services will be private, the family said.