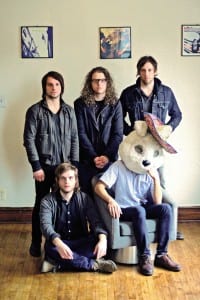 NEW YORK — Borrowing a page from the ’90s grunge handbook, Empires plays passionate, straightforward rock free of any gimmicks and pretense. The DIY quartet take a no-nonsense approach to their music, having financed, recorded and distributed their debut record, “HOWL,” independently in 2008. Their latest effort, an EP titled Bang, earned the group a slot on this year’s CMJ roster, where they’re sure to make a mark. Here’s some basic info about Empires, courtesy of frontman Sean Van Vleet.

SEAN VAN VLEET: The Hulk at a dinner party. No napkin.

SVV: Radiohead, any recorded blues out of the’ 30s (lately), Jimi Hendrix

SVV: Not sure about album, but “Comin Through” by The War on Drugs is the tune doing it for me lately. If their album is anything like that song, that’s it gonna be it.

SVV: “I Want You” by Marvin Gaye, Best of Robert Johnson (not sure it exists, but I’d make sure all 29 songs were together), “The Bends” by Radiohead

SVV: “The War of Art” by Steven Pressfield. If you don’t read this book, you will never truly live.

SVV: Lenny Kravitz and The Black Crowes. Not bad for an introduction, huh?

SVV: Mike Kodak, our tour manager. He’s a thing…trust me. One love, Mike!

SVV: Eddie Murphy. Everything else about him rules.