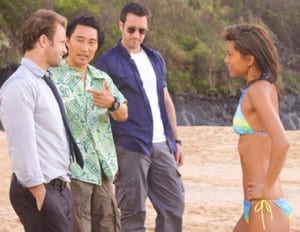 CBS has extended full season pickups to all of its freshman series, including Hawaii 5-0, Mike and Molly, The Defenders, Blue Bloods, and $#*! My Dad Says.

CBS has by far had the most success this season with new shows, though none have broken out to hit status. Hawaii 5-0 and Mike and Molly have both been averaging low-to-mid 3.0 adult 18-49 ratings, truly renewal-worthy.  $#*! My Dad Says has been hovering around a 3.0, but it has the benefit of The Big Bang Theory as its lead in, so it should be doing more. The Defenders and Blue Bloods have both been low, but at least they are competitive in their hours.