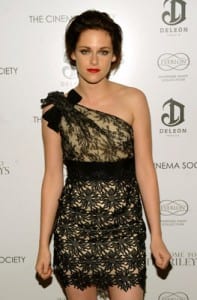 NEW YORK — “Twilight” star Kristen Stewart plays a stripper and prostitute in the film “Welcome to the Rileys,” which also stars James Gandolfini and Melissa Leo, who turned out along with director Jake Scott at the Tribeca Grand Hotel for the premiere.

According to Entertainment Tonight, she commented about playing the character of Mallory, a 17-year-old runaway who impacts the lives of a couple grieving the loss of their teenage daughter, “I did two weeks of it. I did learn how to do it and I got bruises all over my legs. It’s hard, but it actually doesn’t look painful, but it is. It kinda beats you up. This is something that any girl can relate to: if you love yourself and you respect yourself, that’s the only way anybody else is going to.”

The film, which had its world premiere at the Sundance International Film Festival in January, opens in limited release in U.S. theaters on October 29.