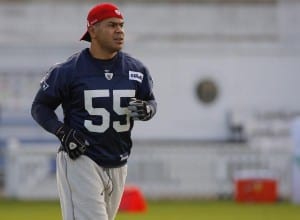 The cliff is not a straight drop, but is a rough slope that goes down about 30 feet.

Seau, 41, was the only person in the car. He was being treated Monday at Scripps La Jolla Hospital. The hospital has declined to comment on his condition.

“At this point we think he’s fine, but we really don’t have any comment,” said Richard Doan, who answered the cell phone of Bette Hoffman, who works for Seau’s charity foundation. “There are no injuries, but he seems to be a little shaken up.”

Drugs and alcohol are not believed to have been factors in the crash, said Carlsbad Police Department dispatcher Matthew Pinell. Seau told police he fell asleep at the wheel.

“Falling asleep at the wheel? How often is that the case with NFL players? I’m glad he’s OK, but I’m skeptical” said 22-year-old Victoria Martinet, a resident of Carlsbad.

Seau was arrested Sunday night at his Oceanside home, for suspicion of domestic violence. The victim was his 25-year-old girlfriend, who called police around 10 p.m. and told police that Seau hit her during an argument. The live-in girlfriend reportedly did not require medical treatment.

Seau was freed on bail and was released from the San Diego County jail in Vista.

The linebacker was drafted out of University of Southern California in 1990 and played most of his career with the San Diego Chargers. He was in the NFL for 19 years, ending his career with the New England Patriots, playing 7 out of 17 games that season. He was a 12-time Pro Bowler and also played for the Miami Dolphins.