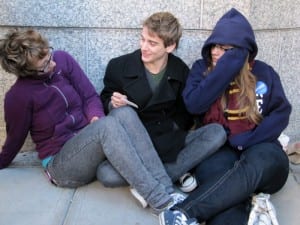 Before Barack Obama arrived in Boston last weekend to campaign for Deval Patrick, three Emerson College students and a fourth from Lesley College arrived at Hynes Convention Center around 6 a.m., more than six hours before doors would open. They were rewarded with third place in line behind two men, one from Cambridge and one from the North Shore, who had arrived at 4 and 5 a.m. respectively.

Not loving the chilly October morning temperature, Brian Foote, the student from Lesley, huddled on the sidewalk against the cold stone wall. His friends Ev Dimming and Lindsay Cole took similar positions on either side of him. Lauren Maquin, the last member of the adventurous foursome, chose to stand and moved around for warmth.

Foote said that the chance to see the president was “an experience not to pass up. Even though it’s really cold, it’s really important. I was excited when I heard he was coming. I’m into the president and I’m excited to see him.”

Not dressed very warmly for the occasion, Dimming also complained about the temperature but said, “we figured it was an experience…and it’s important for college kids to get active and inspired.”

Cole added, “we thought it would be an adventure! Because it’s my first year in college, we figured this would be a high point.”

After going through security, people at the front of the line took their place inside sometime after 1 pm. They still had a long wait before the president arrived, but at least they had shelter from the wintery chill. And there was plenty to keep their attention occupied during the wait, including three songs performed live by James Taylor and a series of speeches by Vicki Kennedy, John Kerry, Thomas Menino, Tim Murray and the governor.