Despite first being an entirely mathematical concept, fractal patterns can show up in nature too.

This past week, Benoit Mandelbrot, the father of fractal geometry, passed away in Cambridge.

Born in Poland, the French-American mathematician grew up and studied in France, eventually becoming a dual-citizen. He taught and worked at many schools in the two countries, including time as a visiting professor at Harvard.

Mandelbrot is best known for pioneering the mathematical field devoted to describing fractals. Fractals are geometric patterns that grow more complex as they are observed more closely. Imagine a triangle. Now draw a triangle inside that triangle. Repeat it, again, and again. This design could go on forever, yet it is all encompassed in the defined area of the first triangle. 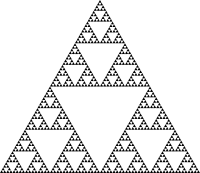 Mandelbrot’s work has engendered widespread applications in diverse fields, from biology to economics. For example, his work has enabled development of mathematical models for cliffs, coastlines, and capillary beds.

Mandelbrot also brought math to the layperson, publishing a seminal book, The Fractal Geometry of Nature in 1982. Despite being full of symbols and equations, even the non-mathematician could understand the point that Mandelbrot communicated for most of his life: even the rough and irregular is part of nature and can be beautiful.