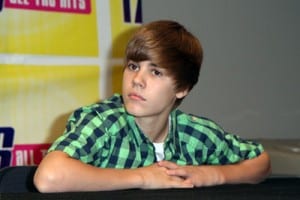 The teen pop sensation Justin Bieber was reportedly being investigated for assault in British Columbia, Canada, this weekend, following a 12-year-old’s claim that Bieber hit him on Friday during a game of laser tag.

The New York Daily News is saying that Bieber, 16, was only defending himself, and that his accuser was taunting him with gay slurs.

According to published reports Bieber showed up at Planet Lazer with two body guards and proceeded to play a round of laser tag with about a dozen other kids. The owner of the facility told the Canadian news site that the singer was kicked out of the building after after punching a 12-year-old boy and the boy complained to the staff.

TMZ reported that the 12-year-old repeatedly went after Bieber, harassing him and specifically targeting him. When Bieber asked him to lay off and play by the rules, the boy said, “What are you going to do about it faggot?” He reportedly continued to taunt Bieber, saying “You’re a faggot,” again and sticking his hand out, which the singer pushed away. Did he just defend himself or what?

According to MTV News, Royal Canadian Mounted Police confirmed Sunday (October 17) that an investigation was underway regarding an incident at a “Richmond entertainment facility” just before 5:30 p.m. on Friday. The father of a 12-year-old boy told authorities that his son was assaulted by another young male at the facility. The tween didn’t need medical attention and walked away with “minimal injuries.”

Since Bieber, and the boy in question, are both minors, no details of the incident will ever be officially released, according to Canadian authorities. So…will this be one of those celebrity myths…?

Bieber is set to perform at a concert in Vancouver on Tuesday.