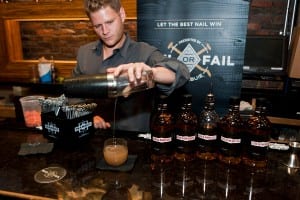 BOSTON — Drambuie Liqueur invited Blast to help judge the two-night “Nail or Fail” cocktail competition in the search to find Drambuie’s next signature cocktail. The event, which was held at The Good Life and at Lucky’s Lounge, featured the talents of 16 Boston-area bartenders.

Each competitor was asked to create a drink that celebrates the flavors of Drambuie, a scotch whiskey liqueur with hints of honey and a blend of herbs and spices. They were judged on presentation, taste, and creativity by a panel of three VIP judges and by the lucky guests of the event who made the list. Guests were treated to free samples of Drambuie’s classic cocktails: the Rusty Nail (Drambuie and scotch), the Crushed Nail (Drambuie, club soda, and muddled limes), the Ruby Nail (Drambuie and cranberry juice), and the Iced Nail (Drambuie and iced tea). Once the competition got started, guests were also offered free samples of the bartenders’ unique creations.

Dave Delaney from The Citizen Wine Bar, who came in first place at Lucky’s Lounge, said that when creating his winning drink, the Highland Swizzle, he wanted to make smoke the main flavor focus. “I picked up some Lapsong Souchong Tea, which is a black tea that has been smoked over pine needles,” he said. “My first experiment was simply brewing the tea and adding a shot of Drambuie.  It was beautiful; they complimented each other perfectly.  Now was the challenge of making it into a cocktail.” 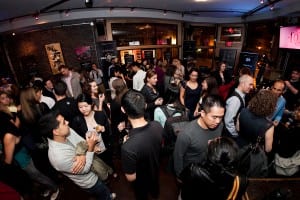 His efforts resulted in his first win at a cocktail competition. “I take a lot of pride in what I do,” he said. “I pay specific attention to detail of ingredients and presentation, and I told myself that I was gonna show up, do what I do to the best of my ability, and hope that the judges will see my passion for the craft.  I’ve come in second in a few competitions, so when they announced my name it was like a huge weight off my shoulders.  There is really no way to describe the feeling; it was overwhelming.”

The competition, which has already occurred in Phoenix, Denver, Columbus, and Milwaukee, will continue on to Philadelphia, New York, Austin, and Portland. The final winner from all nine locations will be determined by bigwigs at Drambuie and Bacardi.