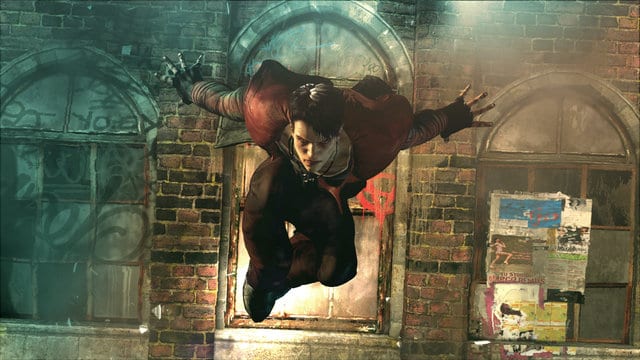 The hack and slash gaming community has been waiting very patiently for the next installment of the hit series Devil May Cry. The first game in the series was intended to be a Resident Evil title, but ended up going down a different path and was developed into its own game. The main character in the series Dante has spread like wild fire in the gaming community, and is so popular the character has earned a spot in the upcoming Marvel VS Capcom 3.

When a popular gaming series receives a new treatment fans can become very vocal in a positive or negative way. The team at Ninja Theory is bringing something new to the table and just by looking at the image above Dante has received a major over haul. Will this cause die-hard fans to cringe or do the series justice, and will the game play live up to the series already impressive catalog.

Based on the trailer Ninja Theory released I think he looks like a young version of the Joker without make up, but it’s early to count this title out. The trailer shows Dante using his classic dual pistols to take down demons (if that’s what they are) but his rebellion sword is missing. I am a huge fan of the sword and gun combat the series is known for, if they remove the sword play I will be one unhappy fan. The trailer shows a very dark game environment and more of a twisted psychotic take on the Devil May Cry universe. This is news I have been waiting for with much anticipation along with the entire hack and slash gaming community. While I am not happy with the redesign of Dante at the moment this sometimes can be a great thing for a franchise. I have much faith in Ninja Theory and I can’t wait to see how the game play is and I will you keep you the reader updated.