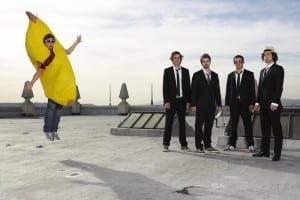 “Fans may come because of Twilight, but they stay because of the music,” Ben Graupner said in his interview with Blast.

Graupner is a member of 100 Monkeys, a funky rock band that is also made up of “Twilight” star Jackson Rathbone, as well as Jerad Anderson, Ben Johnson and Lawrence Abrams (whom they call “Uncle Larry”).

The 100 Monkeys has rapidly been gaining popularity over the last few years. In July, they released “Live and Kicking,” a live album with tracks from their most recent tour around the country.

The 100 Monkeys are an indie band distinguished not only by their wide musical range and astonishing energy, but by their performance as well. Don’t be surprised to see the band members switch instruments and vocalists every other song during their theatrical live sets. It’s just their “Monkey Switcheroo.”

“It’s a huge party,” Graupner said about their performances. “That’s exactly what it is. It will make you smile and move. The lights come up, the energy thrums and then it’s just a bunch of fun.”

The goal of the 100 Monkeys is simple: to have fun and inspire creativity. That’s where their name comes from – the 100 monkeys affect, the idea that once a large group of people start doing something it spreads to everyone else and becomes common knowledge. 100 Monkeys aims to inspire people on this same principal.

Graupner chatted with Blast about the music, current and upcoming projects and jamming with his friends.

BLAST: What is your favorite instrument?

Ben Graupner: Oh man, that’s a hard one. It changes from moment to moment. Right now my favorite instrument is the piano. But I don’t know what it’s going to be tomorrow.

BLAST: Are you playing any new instruments?

BG: Yeah, actually we got this really great, cool…well we actually have a couple of cool new ones. Jackson (Rathbone) got gifted this five string guitar from Puerto Rico. I don’t know the actual name for it, but the thing is pretty awesome. We also got, from some fans in Texas, an instrument called a waterphone, which you play with a violin bow and it sounds like those screeching sounds you hear in a horror movie; it’s really fun. And we have a musical saw; we’ve been playing lately too. 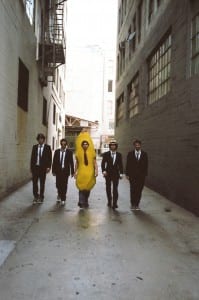 BG: (Laughs) Oh yeah, who knows. Maybe one day someone will pick one up. But that’s one of the trickiest instruments to learn, kind of like the violin. You just have to have the time.

BLAST: How many instruments do you play?

BG: You know I haven’t really kept count. I kind of have a varied skill level on all the different ones, but we’ll really pick up anything and give it a whirl.

BLAST: The music of 100 Monkeys has been described as a fusion of rock, jazz, blues, folk and even country. What would you call it?

BG: We always call it funky rock and roll, but we’re always throwing in something to change it up. We play a lot of country style tunes; we love to plays blues and things like that. We kind of look at the catalogue of music that we’ve been making, and we see if there’s a gap in there. Like if we haven’t done a reggae song in a while or we haven’t done something with kind of a hip hop beat, we’ll do a song then just for the sake of having one like that.

BLAST: What is your favorite part about performing in front of an audience?

BG: All of it. (Large audiences, small audiences) it’s all the same. It’s just all so wonderful. That’s one of the best parts about performing – how varied it is. You can really turn anything into a stage or venue whether it’s a parking lot or bowling alley or a candy store or a giant theater for six hundred people or a thousand people – you name it.

BLAST: Do you have a favorite 100 Monkeys song?

BG: I really don’t. I really like playing “The Thank You Song,” that’s a staple we play at almost every performance and the make up songs are always great too.

BG: Oh, I don’t know. There are just too many. I was just listening to the tracks from the last tour we were on, you know the house recordings, and we had one called “Road Trip” that we played in a venue up in Vancouver and that was just a fantastic make up song. It was just really great, with everyone yelling and having a great time.

We try to do improv songs at every show. There’s been a few exceptions, but almost every show we’ve played we’ve made up at least one song, sometimes two or three.

Of course (some of those songs have been a complete disaster). There have been some where the endings don’t come the way you want them to, or the middle just doesn’t happen the way we want it. It’s just part of the territory.

BG: It’s different every times. Sometimes someone writes it in its entirety and brings it into the band, and then we’ll all work in specific instruments. Other times we’ll all be jamming on the riff, and it will evolve into a song like “Future Radio.” We made that song in the course of a day, and we were just kind of hanging in our studio playing and it evolved.

Other songs like “Junkie” and “The Thank You Song,” we’ve been playing for as long as we can remember, and they’re different every time because there’s a staple album and improv album. That song (“The Thank You Song”) was originally this jazz riff that Uncle Larry was playing on the piano and then we put the bass line behind it and Jackson started singing you know, (singing) “Thank you for existing.” So the process is different every time.

BLAST: What are you guys working on now?

BG: We’re finishing up our sophomore album. We’re going to be announcing its release date the first week of November. We’ve got almost all of the tracks laid down, and we’re going into the mixing stage. We’re really excited about it. It’s a great project.

We aren’t going to know (how many songs will be on it) until we’re finished. We recorded our songs, and they need to fit on one single CD. So when we go in to mix the album, we’re going to have to pick which ones go on there. Maybe the other ones, we’ll keep for our next project. Perhaps we’ll just release them as singles. We don’t know.

We actually don’t have a name (for the album) yet. We sit around all day throwing names at the wall, and you know we just don’t know what we’re going to call it yet. We’re still waiting.