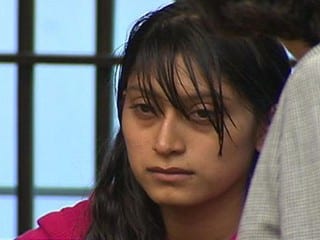 A teenage mother allegedly threw her baby boy out a second story bathroom window after she gave birth in her bathtub, prosecutors said Tuesday.

Eva Flores, 18, of East Boston, is charged with reckless endangerment of a child and assault and battery on a child causing injury.

The baby fell 17 feet into an alley off Saratoga Street after Flores allegedly tossed him away on September 20.

Her baby survived but was suffering from abrasions and hypothermia when he was first hospitalized at Massachusetts General Hospital. The boy also suffered skull fractures, bleeding in the brain, and has a seizure disorder.

Flores allegedly confessed the deed to Boston Police. Evidence, including part of the umbilical cord, were found in the tub’s drain.

A neighbor heard the baby crying and found him lying face down in the alley.

The state Department of Children and Families took custody of the child.