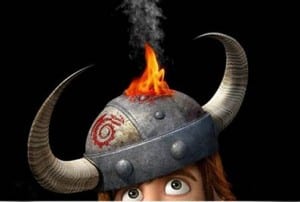 Cartoon Network announced Tuesday that DreamWorks Animation’s critically acclaimed feature film, “How To Train Your Dragon,” will be coming to the network as a weekly series in 2012.

The film has been a success with audiences and critics alike. It’s an adventure-comedy about a young Viking and his unlikely friendship with a dragon that has grossed nearly $500 million at the worldwide box office. It comes to DVD and Blu-ray on October 15.

“Great characters and captivating story telling along with state of the art animation is what we love giving our audience,” said Stuart Snyder, President/COO of Turner’s Animation, Young Adults and Kids Business. “The How To Train Your Dragon weekly series definitely falls into that category of giving our viewers around the globe something they can’t find anywhere else on television and DreamWorks Animation is a proven leader in taking this art form to the next level. We are ecstatic to be bringing this project to our network and working with everyone at DreamWorks Animation.”

“How To Train Your Dragon,” based on the book by Cressida Cowell, rolls fire-breathing action, epic adventure and laughs into a captivating and original story. Hiccup is a young Viking who defies tradition when he befriends one of his deadliest foes—a ferocious dragon he calls Toothless. Together, the unlikely heroes must fight against all odds to save both of their worlds.

In the television series, the characters and worlds originally created for the big screen will be explored and further developed in a number of exciting ways that will be revealed over time. TV audiences will be taken on original, new adventures with Hiccup and Toothless every week.