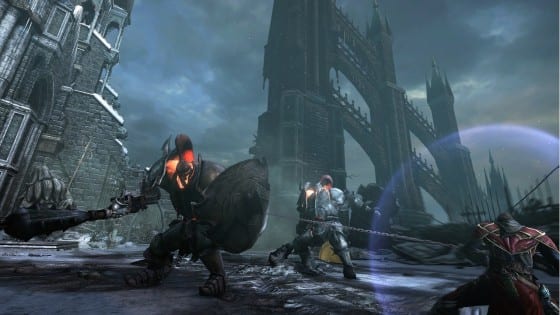 Video Game legends rarely need a rebirth, but Castelvania, the long running vampire slasher that debuted on the

Family Disk Computer System in September of 1986 had it a brick wall.  Once standing among the medium’s elite, groan worthy installments and terrible spin-offs led many gamers to believe that the series was finished. Something had to be done if the Belmont clan was to be saved.

That something apparently was Hideo Kojima. The legendary developer and producer of the Metal Gear Solid franchise has been handed the reins to the struggling franchise and presents us with a much darker and much more grown up telling of the Castlevania saga. Ironically, n the process of finding this new identity however, the game looses any sense of individuality. This, coupled with a series of frustrating design issues and technical snafus limit the potential of what could have been a downright thrilling rebirth.

In Lords of Shadow, players take control of Gabriel Belmont, rather than series mainstay Simon during a time dubbed as “the end of days.” Belmont is on a quest to resurrect his wife, and sets out to find a mystical item that can bring the dead back to life. AS you’ve probably guessed, the journey won’t be an easy one — you’ll have to travel through a forbidden land where the Necromantic Wars took place years ago, and as a result, are completely over run by zombies, werewolves and of course, vampires. The plot, as convoluted as it may sound plays out rather nicely in an impressive universe. The game features impressive voice acting and narration by one Patrick “Jean Luc Picard/Avery Bullock” Stewart. Shortly into the game though you’ll realize that the game’s alluring universe never truly gets explored to the extent it deserves. Sure, there’s a few notes and a bit information doled out during cutscenes, but you can’t help but feel like you want more.

Lords of Shadow’s main draw for most players should be in the game’s impressive, God of War like combat system. You know how Kratos has his chaos blades? Gabriel has his whip – and the effects are stunningly similar.  You’ll have access to two different attack types – one short but powerful and the other long but weaker to dish out dizzying combos on unsuspecting baddies. It’s definitely not a bad thing that the combat mechanics are so similar to that of Sony’s Greek mythology trilogy, but where Castlevania really sets itself apart is with is the weaponry selection later on in the game.  As you progress through Gabriel’s quest, you’ll gain access to weapons like silver daggers, holy water and even fairies that are each better used in certain situations than others. This of course brings an undeniably fun and rewarding strategy aspect to the world. At least it saves you from the sorry ass magic that seems to have been thrown in at the last second.

If the game’s strong suit is its combat sequences, it’s other half, the puzzle aspects are its weakest. Though there are a few quality ones sprinkled throughout the game, most of Castlevania’s puzzle elements are absurdly easy and serve merely as ways to break up the game’s action sequences. Even worse yet is the fact that if for some reason you can’t figure out a puzzle, you can “buy” the solution with hints. Cheap much?

Technically speaking, Lords of Shadow is a mixed bag, it’s detailed visuals mix well with superbly done animations, but there are still a few frustrating and clumsy elements here. Key among them is the fixed camera, which seems like it was programmed to make even the simplest solutions all the more difficult. Many portions of the game require Gabriel to traverse tight passages or deal with surrounding enemies, and more often than not, you’ll be faced with a camera that likes to position itself at the worst possible angle – often taking the focus off of your goal, forcing you to take on a lot of damage. It was also apparent that the game wasn’t playing by any set of predetermined rules very early on, as attacks often don’t land with the same damage as before – like the obstacle that wasn’t destroyed by my strong attack unlike the one previous to it that was.

The Blast Factor: Castlevania: Lords of Shadow clocks in at roughly 15 hours of gameplay if you go searching for everything you can. Though it’s easily a great restart for the franchise, the game pales in comparison to those it tries to emulate. As one of the longest franchises in modern gaming, I longed for Castelvania: Lords of Shadow to be fresh, to be new, but sadly, that’s not the case.