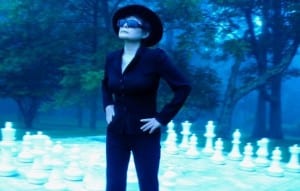 ROME — Fourteen years after the “Yoko Ono film festival” in 1996 in Palazzo delle Espozioni in Rome, the Japanese- American artist, musicians and peace activist Yoko Ono has a new exhibition entitled “I’ll be back” at the Studio Stefania Miscetti in via delle Mantellate 14. The show which runs until October 30, features pictures, sounds, sculptures and pieces of dialogue inspired by the Italian Futurist movement, whose work Ono first witnessed at London’s Tate Modern Gallery.

Yoko Ono is a multimedia artist who constantly challenges the traditional boundaries of art, known for her groundbreaking conceptual art, instructional arts, performance arts experimental films and music. Her most recent album, “Between My Head and the Sky,” 2009, has received international critical acclaim. Yoko Ono is well known for her peace initiatives, first with her husband John Lennon, “Bed-In” for Peace and “War Is Over! (If You Want It)”, and more recently with her Imagine Peace Tower in Iceland and participatory Wish Trees throughout the world.

Opening hours : from Monday to Friday from 4 p.m. to 8 p.m. Saturday only on appointment.