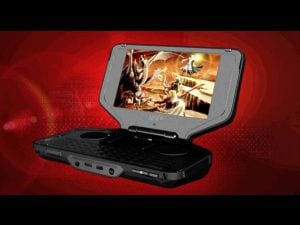 Do you long for your virtual worlds when at work? Do you wish you were riding your trusty mount when you’re really slumming it on the city bus? Panasonic has something they’d like to show you.

The long rumored, and finally unveiled Jungle has finally been unveiled by Panasonic and grants access to MMOs and other online titles to gamers on the go. Featuring a few QWERTY keyboard, shoulder buttons, a touch screen display, HDMI port and a D-pad, The Jungle looks to take on handheld kings like the iPhone and the Nintendo’s DS…oh, and the PSP too…I guess.

Boldly proclaiming that they “are online,” The Jungle’s developers call it “a mean little machine” and aren’t shy of taking on the competition.  The first game to fully support the Jungle will be the upcoming BattleStar Gallactica MMO.

No release date or pricing strategy has been announced for the handheld, but let’s just hope they’ve learned their lesson from the ill-fated 3DO.