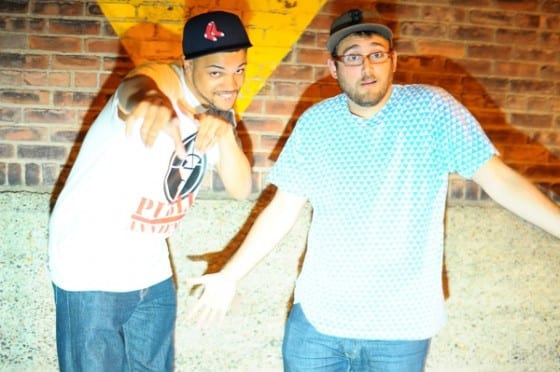 Despite competing in an online market that’s harder to be discovered from than Craigslist’s “missed connections,” Boston rapper/producer team, Black El x Durkin, has already created a surprising buzz for themselves.

Every day, the Internet becomes more riddled with free hip-hop mix tapes. The sheer amount of new rap music that can be accessed online makes the task of uncovering brand new artists almost impossible. Success in the over saturated world of online mix tapes is generally reached by artists who are already established in the mainstream (see Lil Wayne, Andre 3000), or those who produce such an alarming volume of material that they become difficult for Hip-Hop heads to ignore (see the mix tape back catalog of Chicago duo Cool Kids).

With their debut project, Color Commentary, Black El x Durkin has caught the attention of a number of well-respected hip-hop blogs. This fact alone demonstrates the promise of the local duo. Production of backpack rap being at an all time high, the emergence of an artist with just one EP under their belt suggests that there must be some talent behind the release. A few listens to their rookie mix tape confirms that this local duo has enough skill to move from the free downloads of datpiff.com to the charts of the iTunes store.

Black El’s flow has a tight, punchy quality similar to that of Talib Kweli. He has the ability to consistently fill bars with quick and clever couplets, particularly on tracks like “Go!” and “Hi(GH).” The MC is also aware of the value of a decent sing/rap-along hook, the likes of which is best achieved on “Once A Week.” One can easily envisage an audience of college kids playing a game of hip-hop call and response to this song.

In terms of Black El’s lyrics, it is refreshing to hear a young Boston rapper not banging on about how “wicked crazy” the college party scene is, a la Asher Roth or Sam Adams. Though the song “Lunch Line Rap” (with lines like “keg stand girls – too easy to tap”), might find itself providing the soundtrack of a few games of beer pong this semester, most of El’s lyrics deal with more traditional hip-hop motifs. The MC creates mix of witty word play (“close to big Bills like Claire Huxtable”) and self-referential story telling (“I cheated, I beated, copied all that / applied to twenty jobs, ain’t received a call back”). There are times at which the rapper’s complaints about his middle class upbringing fail to pack much of a poetic punch. For the most part, however, Black El shows himself to be an MC who can start either a party or an interesting dialogue.

While Black El’s rapping is more than satisfactory on this ten-song mix tape, what really impresses is the tight production of Northeastern alum, Durkin. The DJ has been doing the rounds, playing club nights around Boston for a few years. “Color Commentary” exposes Durkin’s skill as a beat-maker to a mass audience for the first time. The producer’s tracks manage combine a number of well-established hip-hop techniques in some intelligent ways. Chopped and looped soul samples, relied upon by producers like 9th Wonder (formerly of Little Brother), are made to work along side throwback, boom-bap baselines of artists like Cool Kids. Durkin builds both multi-layered tracks and more straightforward tracks for Black El to spit to throughout the album. “Chutes & Ladders” combines repetitive vocal samples, a strong 808, synths, and various other electronic sounds. Whereas, on “The Jam” all Durkin needs is to play around with the tempo of some old soul records and add some drums to create a full sounding instrumental. Perhaps most importantly, Durkin’s production fits Black El’s flow brilliantly. The MC has to be pleased to have found a producer who compliments him so well.

As well as the buzz surrounding their debut release, Black El x Durkin has also been well received in live settings.

The duo played The Middle East Upstairs in Cambridge on Monday and will likely continue to build their local fan base. Based on the evidence they’ve produced so far, this pair looks set to gain popularity over the next few months. Get to know them now and your friends will think you’ve made the coolest local hip-hop discovery since DJ Premier met Guru.

Color Commentary is out now and available online.