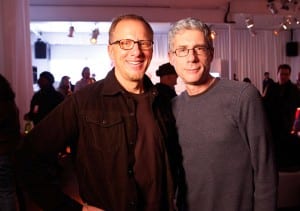 Filmmakers Rob Epstein and Jeffrey Friedman are best known for their award-winning documentaries, “The Life and Times of Harvey Milk” and  “Celluloid Closet.” On this reputation, the estate of celebrated Beat poet, Allen Ginsberg, approached them about creating a film exploring “Howl” the groundbreaking poem that helped define a counterculture and gave rise to a landmark obscenity trial.

That film opened in Boston last weekend. Starring James Franco as Ginsberg, it uses both live action and animation from Ginsberg-collaborator, James Drooker, to dramatize the poem’s inception, original performance, controversial reception and aftermath. Blast spoke with the writer/directors about the concept of the film, working with James Franco, and the legacy of “Howl.”

BLAST: I went into this film pretty cold. I know it was about “Howl,” and so I thought, “maybe it’s a biopic about Ginsberg, or maybe it focuses on the obscenity trial,” and it turned out to be what I took to be a biography of the poem.

JEFF FRIEDMAN: Yeah, we call it a “poem pic.” That’s our new categorization.

BLAST: Have you seen this done before? Did you have a role model for this?

ROB EPSTEIN: We had different role models for different reasons. “American Splendor,” was a role model””a film that incorporated documentary reality, fictionalization of that documenting of reality, and admitting how one influenced the other, and animation. And just elementally we found inspiration from different films.

For the interview, we thought of and looked at a film called “Portrait of Jason,” a 1967 documentary by Shirley Clark, who was a beat filmmaker herself. The film is an interview with a black hustler/queen/drunk; A great character study, completely mesmerizing, and all it takes place in this one room, an interview in the course of a day. We saw that as a film that could really hold you because your really interested in what this character has to say and represent. For animation we looked at Pink Floyd’s “The Wall.”

BLAST: On the idea of being upfront about what was real and what was fictionalized, I read that the trial scene was completely culled from transcripts of the original trial?

JF: The trial scene and the interview were all taken from documentary texts””things people really said. They’re edited and rearranged and made more dramatic by juxtaposition, but that trial is verbatim. And that’s what drew us to it. It was so crazy that people were having this trial where they were discussing what an “angel-headed hipster” was.

BLAST: The interview scenes as well, that was culled from real interviews?

RE: Multiple interviews throughout his lifetime. The inspiration for that was that we had read that when the trail was going on, Allen Ginsberg was out of the country. He didn’t really give a shit about the trail. He was in Tangiers.

JF: Except he didn’t want Lawrence (Ferlengetti) to go to jail.

RE: Yeah, right. I guess he did give a shit about the trial. But Time Magazine flew him from Tangiers to Rome and did this interview in a hotel room, but this was never published and there was no record of the interview. So, we were intrigued by this idea and thought, “We’ll, recreate it.”

BLAST: So did (James) Franco study other video footage of Ginsberg?

RE: A lot of audio. There was a radio show with Studs Terkel. You get a lot of Allen’s character from this interview, so James listened to that a lot. There’s very little footage of Allen from that period but there’s later footage of Allen, so he could get a sense of him physically””

JF: “”“Pull My Daisy,” which is just a little bit after that period, a Robert Frank film with Ginsberg and Kerouac just kind of clowning around and being normal.  You can get a sense of them.

RE: Most of the rehearsal time that we did with James was about the content””about what was going on emotionally and psychologically for Allen for each of the lines of dialogue he had.

BLAST: With Franco””and this is probably not the first time you’ve heard this””I was pretty surprised he was going to be playing Ginsberg, mostly because I think of him as kind of a heartthrob and Ginsberg, not so much, and I wondered, having Franco as your Ginsberg””how did that end up shaping the material you wound up using?

RE: You know the most important thing for us was that we have an actor who was smart and really understood, certainly the text””which is so complex””of the poem, but also really understood Allen’s story, that he understood the heart and soul of what was going on, because that has to come through in his recounting, because he’s not performing it, he’s recounting it. We knew that James is a great actor, because we knew his work, especially in the “James Dean Story,” so we knew that he would get it.

JF: You know looking at young pictures of Allen it was at least plausible. I mean, Ginsberg was not gorgeous that way that James is gorgeous, but you know, he was a good looking guy when he was 30, and you know, James was able to bring that kind of youthful energy that was really so essential to the poem. It really is about youthful rebellious creativity.

RE: He was able to act the New York, Jewish, nebbishy part of Allen too.

BLAST: Thinking again about the structure and the idea of a “poem pic,” did you think of the poem as a character? Did you try to give it the same journey or arc?

RE: Yeah, that’s a very good description, and I don’t think we ever articulated it that way, but yeah, very much so. Each of the ways the poem lives in the film has its own arc and narrative.

BLAST: There’s a moment in the trial that particularly stood out to me and stayed with me; it was when a literary critic is testifying about what he thinks the poem means and he says, “You can’t translate a poem into prose.” You guys were translators of sorts and I wondered if that was a quote you thought about in terms of the kinds of translating you were doing.

RE: Yeah, I think that would be a great tag line for the poster.

JF: We didn’t think of it as a translation, we thought of it as an adaptation, the way you would adapt a novel. And that’s just one part of it, the animation. The poem lives in several different ways in the film. It lives as performance art, because it was the first spoken word performance art, as the first poetry slam, and it exists as evidence in the court room when people are trying to understand it. So we felt that we were presenting it in enough different ways that the audience would be able to understand it in the way that was most comfortable for them.

RE: And the animation seemed liked an opportunity to bring to life some of the ideas and themes in the film that you could do in cinema that you couldn’t do in any other form. It was a way to create cinema out of the idea of Moloch and what Moloch represents, for example.

JF: And because Eric [Drooker] has collaborated with Allen on this book of illuminated poems, including “Howl,” we felt like the process had begun with Allen. Allen had chosen Eric to illustrate his work and we just animated it.

BLAST: One of the things that I loved about the way the animation popped up is that you see him sitting at a typewriter, starting to hammer away at the poem and you think to yourself “they’re not really going to dramatize the typing of Howl”¦

And then it explodes into hallucination.

RE: We were struggling one night with how do you make the literally transition from how you go from the live action to the animation, and we had never really solved that riddle. It was late one night in the editing room when we realized we could have those typewritten words transform into imagery. It seems obvious now, but it was a light bulb moment.

BLAST: Getting back to the idea of what’s based on reality in the film and what’s speculation””another moment I really enjoyed was a moment of Ginsberg on a park bench with Kerouac, where he reads the famous line about “I was eating a meaty sandwich and discovered that I had bitten into a dirty man’s asshole,” to see if he can get Kerouac to laugh, to break up, and when he doesn’t, he’s slightly mortified, like, “man, I’ve really got to work at this…”

Did that come from any account or was that imagined?

RE: That was totally improvised. We just gave the actors their agenda and directed them as to what was going on between them at that moment””I mean Jack’s motivation at that moment is to show that he really isn’t impressed, that that just isn’t good enough, and Allen’s motivation in that moment is to please Jack. That’s what was driving him initially until he got to the pivotal moment where he was just writing to please himself.

JF: James said, “You’re not going to use any of the dialogue from this, right?”

BLAST: So let me ask you guys about the poem. What shocks you about “Howl?”

JF: I was surprised at how radical it is in every way. I was surprised at how queer it is. It’s not something I remembered””I think I sort of blocked it out when I was in high school. I mean it’s about a lot of things: it’s about corporate mind control and consumerism and millitantism and all kinds of sexual liberation, but there is a really strong queer thread that runs through it. And it still has the power to shock, I think. Some of the language and imagery still has the power to shock, which is kind of amazing.

BLAST: So you guys have obviously thought of the way that mores have changed since the 50’s, what about the way poetry is received? How has that changed from the 50’s to the world of your viewers for this film?

RE: Well, we thought of this as a spoken word performance and a precursor to rap, so we thought just putting it out in the world to contextualize current art forms in terms of their antecedents was an interesting thing in-and-of-itself.

JF: Poetry really did start becoming a performance art that night in San Francisco when Allen read “Howl.” We really did feel that that was a moment of shift in the culture we could capture. These poets were sexy, and this moment really was about youthful, rebellious, exuberance.