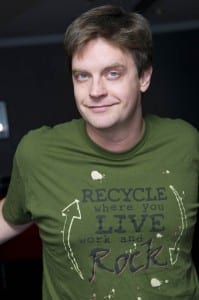 A genre in pop culture that has not been heard from in some time: The Stoner Comedy.

Though a few attempts have been made to rival the classic for our generation, one movie stands up to be called “The modern day Cheech and Chong.” I’m speaking of course about the movie “Half-Baked.” It has been over a decade since the movie’s release, but still it remains a staple in the recreational smoker’s movie repertoire. A major contributing reason for the movie’s cult-like success is due, in large part, to Mr. Jim Breuer.

His upcoming book “I’m Not High (But I Do Have a Lot of Crazy Stories About Life As A Goat Boy, A Dad, And A Spiritual Warrior)” will hit shelves on Tuesday. Blast had the pleasure of talking with this resin-soaked legend about this new endeavor and life as an author, comedian, Goat Boy, dad, and spiritual warrior.

BLAST: What are you feeling as you wait for the official release of your first book? Excitement?

JIM BREUER: You know what, I’m excited, but I don’t really know what to expect. I try not to get my hopes up. It’s like when I was doing Half-Baked. I thought that was going to be the greatest stoner character ever. Thought it would open up the doors for big blockbuster movies. But I haven’t been in a movie since!

BLAST: You’ve got to be a little anxious.

JB: Well, the thing is, I can live with the fact if it doesn’t do well because I wrote it. So I’m alright with it. I love the content. I’ll know I did a good job if I see someone with a copy of it at the airport, reading it in the terminal, like “This is really good!€

BLAST: How did you find the whole writing process? Since they were your stories, did you just find yourself flying through the pages?

JB: It was Emotionally draining. The whole. Freakin. Book. I hand wrote it. No computer or typewriter. Every single story in the book I have an emotional tie to. Whether it be sad, happy, funny, whatever. So by the time I was done, I was exhausted.

BLAST: You say there are sad stories too. Where these personal stories about family, or yourself?

JB: Yeah about family members that died. My brother, A really close friend of mine who passed away as well. There are a couple stories in there about some deep moments with Chappelle. Kind of shows some other sides of him.

BLAST: How did you go about editing the book?

JB: I actually just kind of gave out some copies I had my sister make to some close friends, and asked them to tell me what they thought. Once they read it, they all were pretty positive and told me “I loved this part€ or “This was my favorite section€. Then I knew I was really on to something.

BLAST: Getting away from the book for a second, are you still on tour right now?

JB: I am. This tour goes until December, then I start a little book signing tour. Then next year I really want to push the book with a decent length storytelling tour. Then I’d like to go back to radio full-time.

BLAST: How have you noticed your stand-up act change over the years as you mature.

JB: It’s changed a lot. I am constantly trying to keep the happy medium, though. That being changing the content and subject matter, but not changing the style of the delivery. I probably crush, now, more than I ever have before in my sets.

Jim Breuer is currently touring Midwest comedy clubs and will be making his way up the east coast, and appearing in some New York and New Jersey late November. “I’m Not High (But I Do Have a Lot of Crazy Stories about Life as a Goat Boy, A Dad, And a Spiritual Warrior)” will be available on Tuesday.