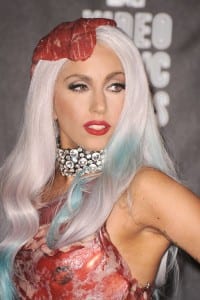 NEW YORK — The crowd at The Oak Room & Bar at the Plaza Hotel got an unexpected surprise last night when Lady Gaga showed up and performed.

Wearing a long blond wig and revealing outfit — which was made of human hair by the way — Gaga made a brief appearance on stage and sang three songs.

Her visit was kept secret until it was revealed on The Oak Room’s Twitter page saying "Lady Gaga here tonight. Maybe we’ll get a serenade in The Oak Bar tonight."

Gaga tweeted "Lonelydreams+champagne streams ,plaza courtyards, I can’t swim among them, so ill drink instead a star."

It is the first time Lady Gaga has appeared in public since the death of her grandfather last week. Joseph Germanotta, 88, passed away at a nursing home in New Jersey.

Meanwhile, Lady Gaga is scheduled to resume the latest North American leg of her Monster Ball world tour in Los Angeles on October 2.