You may know Ed Zwick by some of his bigger movies: “Glory,” “The Last Samurai,” “Blood Diamond” and “Defiance.” It’s been nearly two decades since he directed a film not considered a blockbuster. But that time away from the smaller films, and the experiences he’s had in that time period created a desire for something different.

“These last number of years, I’ve done big movies but really haven’t done (intimate behavioral comedy), that kind of stuff, Zwick said. “I love it and I’d been away from it, so that was the appetite.”

In “Love & Other Drugs,” Jake Gyllenhaal plays a pharmaceutical salesman who meets a free spirit (Anne Hathaway) who suffers from an incurable disease. Set in 1997 against the backdrop of increased drug company advertising, the film is a commentary on love, life and, of course, drugs.

“This is 1997, the year the FDA allowed the drug companies to begin advertising drugs on television,” Zwick said. “Before that, you’re not allowed to talk about Lipitor or Ativan or Celebrex. Suddenly these drugs became consumer commodities, and the whole culture changed. You used to count on your doctor to tell you what to do; now people are relying on advertising and telling their doctors.” 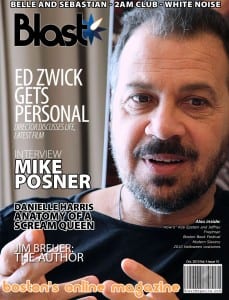 Gyllenhaal’s character, Jamie Randall, is a philanderer and smooth talker who doesn’t live up to his millionaire brother, or physician father and sister. Hathaway plays Maggie Murdoch, whose early Parkinson’s diagnosis drives her to fear her own mortality and to push people from her life.

Zwick has a history of eliciting strong performances from his actors: Denzel Washington won his first Oscar for Glory, while Ken Watanabe, Leonardo DiCaprio, and Djimon Hounsou all scored nominations for their roles in Zwick’s films.

“You have to look at an actor’s body of work,” Zwick said. “I’ve been watching Annie’s work in the last couple of years. Increasingly, the braver she gets, the more she takes chances and the better her work. She’s clearly someone who is ambitious and serious and coming into the height of her power. I thought, well gee, nobody has seen how earthy and tough and funny Anne really is.”

“And Jake, really when given the right script has been extraordinary. Some choices are less good than others I think, but when I got to know him, I saw something nobody else has seen, just how funny he is, and how charming and open and attractive in this way. Nobody has seen Jake be that seductive bad boy, and I said let’s show audiences parts of these actors they think they know but don’t.”

Though audiences have seen powerful performances from Gyllenhaal, such as his Oscar-nominated performance in Brokeback Mountain, Zwick thinks he’s still coming into his prowess as an actor.

Though billed as a romantic comedy, the film does exactly what Zwick wants and detours from typical contrived conventions, and detours into more serious territory as the bond between Gyllenhaal and Hathaway’s characters deepens. Zwick credits life as inspiration for their performances.

“Everyone goes through things. Annie had this relationship that was traumatic. Jake was deeply in love with someone that had two children and it ended, and these things mark you. They have an effect on your soul and your instrument, and it’s happened to both of them.”

For Zwick, the same rule applies. Great things happen, but they are not the sole moments in life. Visibly moved, he briefly shed some light on that moment in his life.

“When I was 30, I got married,” Zwick said. “And within two weeks, my mother died. I think it pertains to this movie, that is has the word and in it. Sometimes the best thing happens, but the worst thing happens as well. It’s not just — it’s and.”