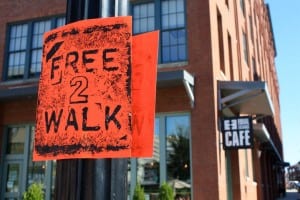 The year is 1829. Abolitionists walk through the Boston Common toward Park Street Church to hear William Lloyd Garrison’s first public address. The 23-year-old newspaper editor declares boldly that slavery is not an issue that should be debated by each individual state; it is a “national sin” that every decent human being must fight against.

The year is 2010. Abolitionists walk through the Boston Common once again; Garrison’s fight has not yet been won. In fact, the anti-slavery nonprofit Not For Sale estimates that 27 million people are enslaved today, more than at any other time in history. People all over the world are being bought and sold for cheap labor and sex. According to the U.S. Department of Education, even children born in America are sold into sexual servitude every year.

To combat this widespread nightmare, people must first of all come to the shocking realization that slavery still exists today. To this end, the Massachusetts chapter of Not For Sale hosts its first annual walk to end human trafficking. Wearing a sea of orange T-shirts and bandannas, 145 individuals gather on the Common to walk the Freedom Trail and to discover how Boston’s grand tradition of fighting for freedom and human rights lives on today and how they can join the movement as modern-day abolitionists.

Timelines collapse as the walkers view historic sites of past centuries’ struggles for freedom. They hear echoes of the very first reading of the Declaration of Independence as they pause at the Old State House, and they can almost see the colonists protesting the British sugar tax on the courtyard at Faneuil Hall.

They pass by The Old Corner Bookstore building, where William Lloyd Garrison’s The Liberator and other anti-slavery literature were published, and the African-American Meeting House on Joy Street, where famous abolitionists such as Frederick Douglass and Sojourner Truth delivered fiery speeches condemning the injustice of slavery.

Reverently, they walk through the six towers of the Holocaust Memorial; each tower represents a large concentration camp and is covered with the numbers that had been inscribed on the arms of the prisoners who died within its walls. The weight of these numbers is overwhelming, but a few stories of hope can also be found within the towers. Of the many statements chiseled into the walkway, one is particularly applicable to the Not For Sale abolitionists: “After the German army invaded Denmark, the Danish people mobilized to ferry 7,800 Jews to safety in neutral Sweden. At the end of the War, 99% of Denmark’s Jews were still alive.” Even in the face of a seemingly unstoppable evil, people can band together and the sum total of their individual actions can equal an effective resistance.