In an era where hardcore has gone soft, Age of End had it together for a few years.

More than your typical screamer band, the double bass drums and vocals of this Haverhill-based quartet put together serviceable songs that made them an opening act with its own following. 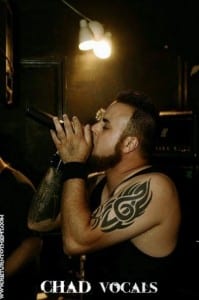 But that era, too, has come to at the very least a crossroads as lead singer Chad Hickman announced Monday he was leaving the band.

Hickman, in a letter to fans and bandmates, said he was leaving music.

“Today I would like to thank you all for your continued support of the music and the bands journey this far. As a band we started creating together and matured into what we have become, a band who has made it to the national level,” Hickman wrote. “With all our success aside, today I am announcing that I have been offered an opportunity that is in the best interest of my family and myself, which ultimately will give me more time at home with my family and my baby girl, therefore, I will be officially leaving the band and my music career behind for now to follow a new path.”

Age of End is perhaps most well-known has an opening act for major national artists. The guys have opened for Sevendust, Shinedown, 10 Years, Nonpoint, Cold, Soulfly, Papa Roach, Chevelle, Unearth, and Diecast, according to Hickman.

Though never a major commercial success, the band garnered positive reviews and endorsements.

“Heavy as Hell! From the packaging to the sonic quality of the disc itself, this might as well be a major-label release,” WFNX-FM jock Adam 12 has said about the band.