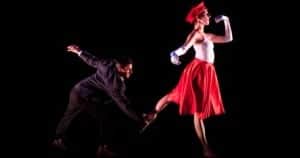 When you hear that, “Fraulein Maria,” is a parody/celebration of the classic movie musical, The Sound of Music,” in dance form, it’s not easy to imagine what your in for. If like me, you’re not overly familiar with the subject of the tribute””I saw “The Sound of Music one time when I was a small child””you may even be a bit trepidatious. Personally, I was almost shocked by how much fun I had from start to finish of this unique performance, which helped kick off the inaugural weekend of ArtsEmerson at the elegant Paramount Center.

“Fraulein Maria,” it turns out, is not only a parody/celebration of “The Sound of Music,” it’s also a parody/celebration of modern dance. The conceit is to take many of the main musical numbers and re-choreograph them in a vast array of dance styles from Martha Graham to hip-hop. Mimicking costumes and set pieces from the film, its numbers are often cast with multiple Maria’s of varying ages, races and genders. Nuns get sexy. Formerly angelic children, get down. The stodgy gets funky.

My favorite dance in the show was “Edelweiss,” the hauntingly beautiful folk anthem sung in the film by a patriotic Austrian in the face of Nazi occupation. I remembered this tear-jerker from my childhood. In “Fraulein Maria,” it plays behind the scene of two men on a park bench: a thin, frumpy citizen in a fedora, and a puffed up gentleman who reveals himself with a Nazi salute and insists on taking up eighty percent of the bench with his stretched out bulk. What follows is a classic and masterfully nailed vaudeville routine in which the two take turns furtively nicking the fedora and donning it like a crown. The scene is at once funny, impressive for its craft and provocative for its symbolism. Such is the case with most of “Fraulein Maria,” with only the exception of numbers that trade symbolism for pure fun.

Of course, the more knowledge you have about the musical, the movie and the dance styles, the more fun you’ll have, but no knowledge is necessary to enjoy the visual humor and grace on offer. This is a great and promising start for ArtsEmerson.

“Fraulein Maria” is conceived and choreographed by Doug Elkins and directed by Barbara Karger and Michael Preston as uses music and lyrics by Rogers and Hammerstein. It runs at the Paramount Center Main Stage through October 3.