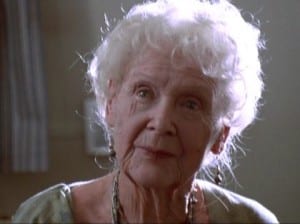 I still clearly remember the scene at the end of the movie "Titanic" that Rose threw the diamond necklace in the ocean when she finished telling the whole story that she experienced.

Gloria Stuart, the 1930s Hollywood beauty who gave up acting for 30 years and later became the oldest Academy Award acting nominee as a survivor in her comeback movie "Titanic," has died. She was 100.

Stuart received her only Academy Award nomination, for best supporting actress, for her performance in James Cameron‘s "Titanic" as Rose Calvert, a 101-year-old survivor of the ship’s sinking. She was the oldest person ever nominated for an acting Oscar, but she lost to Kim Basinger. Kate Winslet, who was nominated for best actress, played Rose as a young, well-to-do, romantically restless passenger in first class who falls in love with a poor would-be artist in steerage, played by Leonardo DiCaprio.

According to Associated Press, Stuart died in her sleep Sunday night at her Los Angeles home, her grandson Benjamin Stuart Thompson said Monday.

Stuart starred in B pictures as well as some higher-profile ones such as “The Invisible Man,” Busby Berkeley’s “Gold Diggers of 1935” and two Shirley Temple movies, “Poor Little Rich Girl” and “Rebecca of Sunnybrook Farm,” but had retired by the mid-1940s.

Cameron wanted an actress who was "still viable, not alcoholic, rheumatic or falling down," Stuart once said in published reports. Then in her mid-80s, Stuart endured hours in the makeup chair so she could look 15 years older, and she traveled to the Atlantic location, where the wreck of the real Titanic was photographed.

"Titanic" took in $1.8 billion worldwide to become the biggest modern smash hit, a position it held until Cameron’s "Avatar" came along last year and passed it on the box-office chart.