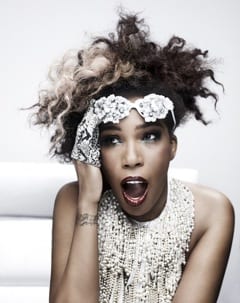 On Thursday, sultry singer Macy Gray will appear at the Wilbur Theater, giving Boston fans an early chance to hear songs from her new album, The Sellout. The album sees a return for Gray to the brand of pleasing, pop/soul that propelled to her global chart success a decade ago.

Macy chatted with Blast recently about her two Boston performances and her first studio album since 2007.

BLAST: The Sellout is your first album in three years. Are there any particular reasons for the fairly long hiatus?

BLAST: Where did you record the album?

MG: We recorded in L.A at a few different studios. I went in with my favorite writers and producers and we did it. We wrote about twenty-five songs and twelve of them are on the record.

BLAST: In your time off, were they’re any new artists who came out that inspired your return to the studio?

MG: Well, I’m always in the studio and I’m always writing. I was trying to look at different things and I realized I just had to do what was right for me, what was in my heart.

BLAST: The album’s title track deals with the idea of not conforming to the expectations of the mainstream music business. Would you say that’s a fair analysis?

MG: That’s exactly what the song’s about. It turned out to be kind of a love song to my fans. Of the songs that we wrote, that was the first one that set the tone for the album, theme-wise.

BLAST: There are three collaborations (Velvet Revolver, Romika, Bobby Brown) on this album that cover a pretty wide musical spectrum. Did you make deliberate choice to work with a diverse range of artists?

MG: Definitely. I like a lot of different things. The cool thing is that all those artists are friends of mine, so that made things easy. I’d been talking to Slash (Velvet Revolver) for a while about being on my record. Bobby (Brown) has been a really good friend of mine for a long time – "Real Love" (the song featuring Brown) is a true, pure love song, which is really what he’s famous for. And Romika is a new artist on my label. It all came together really quickly and easily. It worked out perfect.

BLAST: What do you think the collaborations give to the album as a whole?

MG: They made the whole thing greater. Bobby and Velvet Revolver are both legendary artists. They came in and I think they made it really excellent.

BLAST: Velvet Revolver are known for being pretty "Rock n Roll". Anything crazy go down while you worked together?

BLAST: This is your first time at the Wilbur. It’s a  pretty classy, music hall-type venue. It provides a nice intimate setting for the audience. Are those the kind of places you like playing most?

MG: Well, I’ll play anywhere. I’ll play on the street if I have to. You definitely get a different vibe at those types of places than you do in a club. Everyone dresses a little bit differently and you might get a different reaction. But, every show we do is like a party and it always works out.

BLAST: How have your past experiences been with Boston audiences?

MG: They’ve been cool. We’ve always done bigger shows there, as part of festivals or in stadiums. I haven’t played much in Boston on my own, but it’s always been fun and there are always big crowds. I also once played there with Santana; I’ve always had fun in Boston.

BLAST: You’re also going to be at the Apple Store in Boston the day before your performance at the Wilbur. What will you be doing there?

MG: It’s a little show we’re doing. We’ll be there around midday.

BLAST: Are there any other cities you’re particularly looking forward to playing in on this tour?

MG: I love playing in Atlanta, Chicago’s always a lot of fun, and I live in L.A, so I’m excited about that. Its fun because every city has its own personality of fans, you get a different kind of show in every city. But Chicago and Atlanta are always off the hook.

BLAST: Finally, back to Boston, do you have a message for the folks going to see you at The Wilbur next week?

MG: Just be ready for a party, its gonna be a great timeâ€¦ and, you know, buy more tickets!

Macy Gray will perform at the Apple Store on Boylston Street at noon on Wednesday and at The Wilbur Theater at 8p.m. on Thursday. Tickets are still available. Her album, The Sellout, is available now.