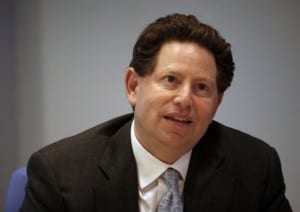 Arguably the biggest story of the summer was the bitter departure of Infinity Ward heads Jason West and Vince Zampella from Activision and the studio they helped create. Filled with enough gossip and and here-say to make a TV movie, the creative minds behind Call of Duty: Modern Warfare and its sequel were part of the messiest break-up in videogame history.

In th  latest issue of Edge Magazine, Bobby Kotick, the head of Activision opens up about the pair’s exit, and the much hated boss is surprisingly candid.

“It shook my belief in two specific people, who were my friends,” he said. “The frustrating thing about that is, the stuff that these guys did, I never would have expected them to do. We’re a public company, we’ve got ethics obligations, and the things they did were… I would go to jail if I did them.”

Kotick and Activision’s lawyers claim that the pair was let go for misusing the company’s assets, and in return West and Zampella fired back, omparing the working conditions at Activision to that of a military state.

Kotick isn’t merely talking about the pair’s past, he even took a shot at Respawn Entertainment, the duos new studio with EA, saying that they’ll ” have a really hard time ever being productive or successful ever again.”

So what do you think? Who do you side with? Let us know!