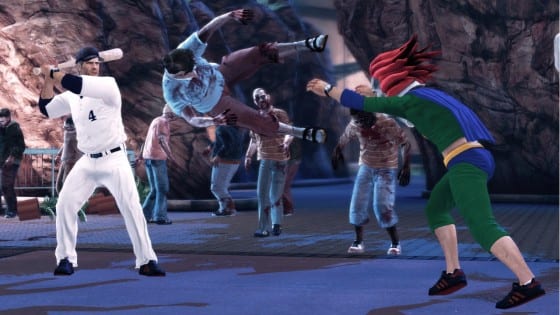 On my desk, I have the following: World War Z, the book about the after effects of the zombie apocalypse, The Zombie

Survival Guide, a figurine of the zombie from Plants VS Zombies and even a Zombie translator. Yes, it’s safe to say that I’m a fan of zombie culture and lore. And yes, it’s safe to say that I loved the original Dead Rising. Sure, it had its issues — like a frustrating save system and a few control issues, but damn it was fun to run around a mall using whatever you can find against a never ending horde of zombies.

The game’s sequel, cleverly titled Dead Rising 2 is along the same lines, its issues are clear, but it’s easy to forgive these mistakes when you’re having this much fun. Everything you loved about the first game is back, but this time in a much larger and much more expansive universe. If you’re able to ignore the small design flaws found in the game, Dead Rising 2 is simply a must buy for action gamers, fans of zombies, and those who just enjoy a fun bloody romp.

Dead Rising 2 plays much like the original, you have 72 hours to survive a zombie outbreak, using whatever you can find as a weapon. Here though, you’re in the Las Vegas inspired Fortune City rather than the Dawn of the Dead inspired Williamette Mall and you’re playing as motocross star Chuck Greene rather than photo journalist Frank West (he’s covered wars you know). When Capcom announced Fortune City as the setting for Dead Rising 2, I wasn’t that impressed, but my fears were proven to be null once I got my hands on the title. Not only is Fortune City massive, but it’s also incredibly fun to explore. People call Vegas a "playground for adults," and that’s definitely the case here as there’s plenty to explore and do in the city and each play through of the game led to even more fun discovery.

The story of Dead Rising 2 deals with Greene and his search for Zombrex — a new wonder drug that slows down the zombiefication of victims — in order to save his daughter who was bitten by her infected mother. It’s an interesting enough tale, but Dead Rising 2 works best when you treat it like it is — 72 hours in a zombie filled playground. Call me sadistic if you want, but it’s incredibly fun and rewarding to grab a chainsaw and take it to a group of the undead. It’s even more fun to hit them with a donkey lamp or clay pot. The core experience of Dead Rising 2 is filled with "can I do this?â€¦Yes I can" moments.

These moments are made even cooler by the new combo weapon system which lets you combine certain weapons and objects into even cooler weapons. Find a baseball bat and a box of nails? Take them to a workbench and combine them. You can make everything from makeshift Molotov cocktails ( newspaper and a bottle) and a flamethrower (gasoline and a super soaker) to some more creative weapons like the boom stick (a combination of a pitch fork and shotgun that literally blows a zombie’s limbs off one by one) and a paddlesaw, which combines a boating paddle with a chainsaw at each end. The little cinematic and rock song that play each time you combine weapons can get old quick, but it’s a minor complaint when there’s so much fun destruction to be had.

Even more so than the original, Dead Rising 2 is a game that’s meant to be played through numerous times. It may sound clich©, but there’s no way to experience all that Fortune City has to offer. From the weapons to the costume changes and all of the little things in between, the game is just too large for one playthrough. Luckily, much like the original game, you’re going to be able to bring your level and moves from your previous playthroughs into your new game. It’s a genius system really, as you’ll be able to explore much easier and therefore find much more each time you play.

New to the Dead Rising franchise is the addition of multiplayer. The heart of Dead Rising 2’s online experience is the co-op gameplay, which lets you and a buddy take on the zombie horde together. It’s not without its quirks, like the fact that you can’t stray from your teammate, but it’s still tons of fun to dress in ridiculous costumes and bat around (quite literally) a few zombies. There’s also the competitive mode which puts you in American Gladiators-esque challenges with zombies. It’s really a lackluster mode and though you’ll want to experience it once or twice, it’s unlikely that you’re going to want to go back much after.

Dead Rising 2 isn’t a perfect game though, there’s a few design quirks that are sure to irritate a few, like the horrid vehicle controls and the fact that the game still uses the timer and that it’s very easy to miss a mission that would have kept the story going. Really though, these complaints are minor, and most will be able to look past them.

The Blast Factor: There’s no doubt about it, Dead Rising 2 is not only the natural progression from the original, it’s a damn fun experience. There’s tons to explore and if you want the entire Dead Rising 2 experience, you’re sure to enjoy multiple playthroughs. If you’re looking for a fun game that you’re going to be able to invest a lot of time in, you can’t go wrong with Capcom’s zombie slashing simulator.